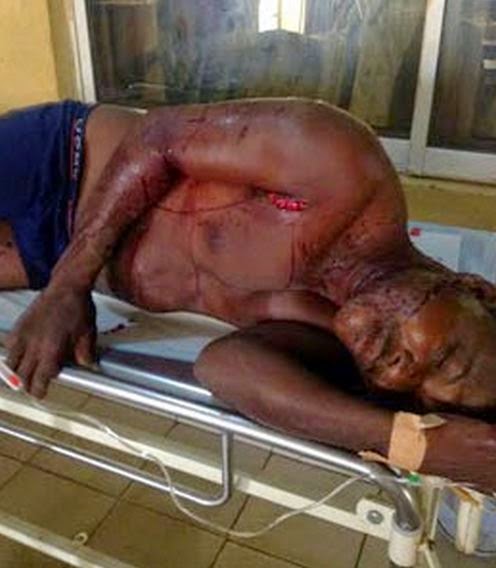 A 45-year-old commercial driver, Saturday Akpomose, narrowly escaped death last Saturday, after he was attacked by seven dogs at Ajah area of Lagos State. The timely intervention of residents and passers-by saved the driver from the dogs.Akpomose, who hails from Akwa Ibom State, had gone to the area with his wife to visit his in-law, Mr. Christian Peter, when the dogs pounced on him.

Vanguard gathered that the dogs, owned by a Navy Captain, were being taken out to ease themselves at a nearby uncompleted building, when they saw Akpomose and pounced on him.The matter was reported at Ogombo Police Division, which referred Akpomose to the General Hospital at Akodo, for immediate treatment due to the severity of his injuries.

When Vanguard visited the victim in the hospital, he said:

“My wife and I went to visit my in-law on Sunday. He lives at Okun Ajah Road, in Eti-Osa East Local Council Development Area. Later, on Tuesday morning, I just strolled out of the compound and came across the dogs.As I stepped out, I saw a security man coming out with several dogs. They were very huge Alsatian dogs. I was terrified when I saw them and as I tried to go back in, they overpowered the man holding them.As I bent down to pick a stone and scare them away, they pounced on me and that was all I knew. They bit me in almost all parts of my body. As I screamed, some residents came out and tried to scare away the dogs with sticks.My screams even woke up my in-law who was asleep in the house. At a time, I became weak and unconscious and it was the people who rushed me to the hospital.”

When Vanguard visited the residence of the dogs’ owner, the Chief Security Officer attached to the building, who identified himself simply as Victor, said:

“Immediately I got back home, I explained his condition to my boss who directed me to see his family and take a decision on how to transfer the victim to his own private hospital for proper medical attention.

“We have bought all the drugs they asked us to buy. We are showing the receipt to you just to let you know that we care about the victim.”