Another Nigerian Simon Ezeaputa, Sentenced to Death for Drug Trafficking in Indonesia 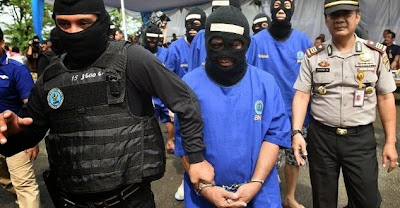 Local media report on Thursday in Jakarta, said another Nigerian, Simon Ezeaputa, has been sentenced to death in Indonesia for drug trafficking.

It said the district court in Tangerang, near Jakarta, on Wednesday found Ezeaputa guilty of controlling a drug transaction from his prison cell, where he was serving a 20-year jail term for drug offences.

The report said the transaction involved 350 grams of crystal methamphetamine. With the latest development, more than 60 people are on death row in Indonesia for drug offences.

The report said Indonesia executed six drug convicts in January and was preparing to put to death another 10 death-row inmates.

It said these include two Australians who have been the subject of a diplomatic row between Jakarta and Canberra.

Meanwhile, the Amnesty International said in its annual report on the death penalty worldwide released on Wednesday that “Indonesia stood out for all the wrong reasons.”

He said there were many issues in Indonesia, in particular fair trial concerns, that make death sentences more complicated.

Hidayat said investigations by human rights groups have found that individuals sentenced to death have been tortured and forced to sign police investigation reports.