APC Wins Majority 214 Seats in the House of Reps 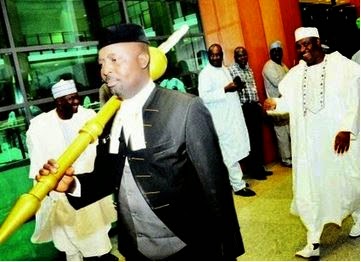 It is confirmed, the new leading party in Nigeria is the All Progressives Congress. The party will firmly be in control of the 8th House of Representatives as the majority party with over 214 members.

Figures emerging from the outcome of the March 28 National Assembly poll, show that APC members are now 214, against the Peoples Democratic Party, which has 125 lawmakers.

The statistics gives a gap of 89 between the APC and the PDP in favour of APC out of 360 members.

The figures exclude the 11 federal constituency seats in Jigawa State, where election has yet to be conducted by the Independent National Electoral Commission.

When elections for the 11 seats are conducted, the APC will possibly get additional seats, meaning that its numerical strength in the House may be well above 214 at inauguration on June 6.

Three other political parties, Labour Party, the All Progressives Grand Alliance and Accord Party, share the balance of 10 seats, bringing the total to 360.

The distribution of the figures shows that the APC has the highest membership haul from the North-West with 81 lawmakers, as against the PDP’s zero score for now.

It is followed by the South-West, where APC won 47 seats compared to the PDP’s 20.

In the North-Central, the party got 41 seats and left 8 for the PDP.

The APC’s performance in the North-East was 40 as against the 7 seats won by the PDP.

The PDP’s strongest zone is the South-South, where it produced 52 members, compared to the APC’s three. The three seats came from Edo State.

The PDP won 38 seats in the South-East, leaving only 3 for the APC in Imo State.

The APC took all the seats in Kano, Katsina, Kaduna, Zamfara, Sokoto and Kebbi in the North-West.

This will turn the table against the PDP, now demoted to minority party.