Home News Buhari, No Hidding Place For Looters Of Our Money

Buhari, No Hidding Place For Looters Of Our Money 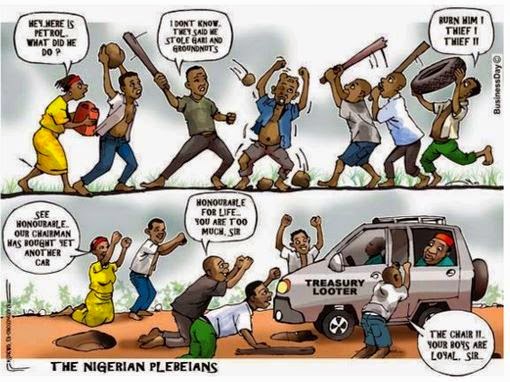 The moral decadence of Nigeria’s political class is playing out in the ongoing mass defections from the ruling Peoples Democratic Party to the victorious opposition All Progressives Congress. No sooner had Muhammadu Buhari of the APC triumphed over President Goodluck Jonathan than the floodgates opened for prominent PDP stalwarts looking perpetually to the spoils of office to jump ship. Buhari and the APC now have a historic mission to break with the prevailing predatory system that has foisted parasitic political elite on the country.

Perhaps unwittingly, the APC’s campaign slogan of “change” has ignited high hopes in many Nigerians that its presidential flagbearer, Buhari, who has, in over four decades in the public glare, built a reputation for honesty and discipline will lead a paradigm shift for accountability in public office. The mass migration of the flotsam and jetsam of the tainted political class to his corner presents the first challenge for the President-elect and his party to stamp their identity as change agents.

There should be no safe haven for thieves...
Unlike what has prevailed in the past few years when a section of the federal cabinet and presidential entourage sometimes looked like a rogues’ gallery, Buhari should clean up our public service by scrupulously keeping tainted politicians and businessmen away from public office and his inner circle.
We have had 16 unbroken years of democratic governance and reject the self-defeatist, self-serving mantra of undergoing a “learning process.” Much smaller African countries like Ghana, Rwanda and Botswana have left us behind in democratic protocol. Some South-Eastern countries like South Korea, Singapore and Taiwan quickly adapted to democracy after years of authoritarian military dictatorship.

The task will not be easy. Some of the personalities quickly switching sides have ongoing cases of corruption in the courts; others have terrible track records in public office, while others are battling damaging accusations of looting that have not been properly investigated due to the prevailing reign of impunity. Yet others are unashamedly fair weather birds hoping the new government will continue the culture of patronage and impunity. Among the defectors are former state governors, ex-ministers, legislators and the large tribe of rent-seekers and influence-peddlers referred to derisively as “Any Government in Power,” who stalk the corridors of power for influence and appointments. Many want protection from prosecution for their past misdeeds.

Buhari should not bend his stated resolve to keep defectors and looters at bay. He should go further and bring all treasury looters to justice. These include private businessmen and women, local and foreign, civil servants and former and current public office holders who, with their collaborators, have made Nigeria one of the world’s most corrupt countries, ranking 136 out of 175 countries in Transparency International’s Corruption Perceptions Index 2014.

A new estimate by the Business Council for Africa surmises that up to $1 trillion has been stolen from the public from 1960 to 2005, higher than the $400 billion estimated by the World Bank to have been stolen between 1960 and 1999. The clean-up will have to start from the President-elect’s party, which was born as an amalgam of opposition parties and defectors – led by five state governors – from the ruling PDP. A significant number among its leadership are also tainted by graft accusations, including un-concluded cases against them by the anti-graft agencies. Buhari should keep them and their nominees out of his cabinet. The rule should apply to private persons.

Breaking from the culture of impunity will put Buhari’s personal integrity to the maximum test. Among his predecessor’s many indiscretions was his unashamed public hobnobbing with persons accused of one misdeed or the other. When, for instance, news of the N2.53 trillion petrol subsidy scandal broke in 2012, Jonathan saw nothing wrong in being seen in rapturous camaraderie with some businessmen whose companies were proved by a parliamentary probe to have defrauded the country. Public morality demands that a leader with honour should keep controversial persons at bay. But many tainted persons regularly featured on Jonathan’s official entourage at home and on foreign trips.

While the law says everyone is presumed innocent until proven guilty by a competent court, we insist that Nigeria should align with global best practices and allow the due process of the law to establish an individual’s innocence before he or she is given public office. A mere allegation that she hired an illegal immigrant as a nanny was enough to deny Zoe Baird the post of the United States Attorney-General under President Bill Clinton in 1993. Once regarded as shoo-in for the French presidency, Dominque Strauss-Khan’s political career crashed after he was accused of sexually assaulting a hotel maid in New York, US in 2011. German Defence Minister, Karl-Theodor zu Guttenberg, was forced to resign after he was accused of plagiarising his doctoral thesis. In Ghana, Victoria Hammah was sacked as deputy minister for communications for merely voicing her ambition to make a “million dollars in politics.”

In Nigeria, despite facing prosecution for corruption, James Ibori, a former governor of Delta State, became a kingmaker under President Umaru Yar’Adua but was eventually jailed in the United Kingdom. The APC, as a ruling party, should also break with the sordid past and clean up its own house. Its leaders, “godfathers” and state governors should stop pushing misfits, looters and dubious persons for public office. Service, not patronage or the notorious “spoils system,” should henceforth be the overriding motive for seeking public office and politics.

Buhari’s election is supposed to sweep aside the old order and form a government fit for the change Nigeria needs. If Buhari fails to distance himself from looters, hustlers and parasites, his government will be a non-starter and his failure will be remembered when he and his party return for votes in four years’ time. Nigerians are watching.

By PUNCH EDITORIAL BOARD

True talk to the pics, but the story!!! Couldn't read it!