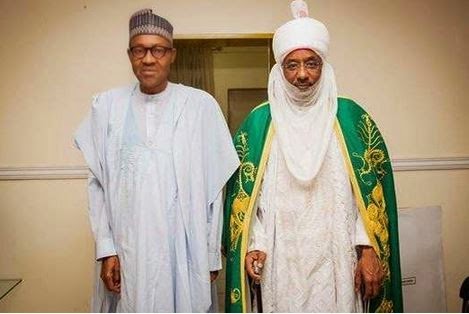 President-elect, Maj. Gen. Muhammadu Buhari(retd.), on Sunday said his administration would take a second look at the claim by a former Governor of the Central Bank, now Emir of Kano, Muhammad Sanusi II, that $20bn, that was supposed to be remitted by the NNPC to the federation account, could not be accounted for.

Buhari said this while receiving a delegation of party supporters and newly elected officials on the platform of the All Progressives Congress from Adamawa State at his campaign office in Abuja.

The President-Elect, who spoke in the local Hausa language, expressed surprise that instead of probing the allegations by the former CBN governor, the authorities chose to fire him.

According to him, since Sanusi’s claim was documented, his administration will take a second look at the document when he assumes power on May 29th.

“On the issue of corruption, I heard that some people have started returning money. I will not believe it until I go and see for myself.


In any case, that is what he wanted. And since this was documented, the new administration will take a look at it.”This is against the background of a pronouncement by the Minister of Petroleum Resources, Mrs. Diezani Alison-Madueke, that the Nigerian National Petroleum Corporation has started refunding the unremitted $1.48bn into the federation account.

While expressing gratitude to the visiting delegation, Buhari in response to several requests, said his administration would work in tandem with the manifesto of the APC.

He listed priority areas to include security of lives and property, the economy, job creation and the war against corruption.