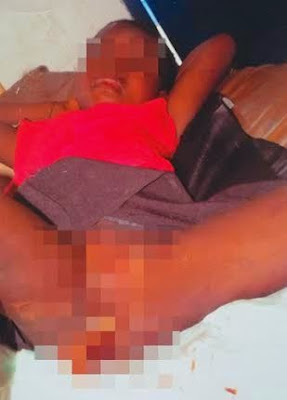 A couple, Eucharia Chukwuma and Jerry Oko-Oboh residing in Joshua street, Ajangbadi area in Lagos state have been arrested for stabbing 10 year old Chidinma pictured above in her private part over allegations that she fiddled with the private part of their 3 year old daughter, Peace on April 6th.

According to Punch, on the day of the incident, the 10 year and the 3 year old, who are neighbours, went out to play. After the couple's daughter returned home from playing with Chidinma, she complained to her parents that Chidinma had fiddled with her private part. Angered by the allegation, the girl's mother Eucharia went to Chidinma's house and met with Chidinma's mother, Ofia.

She asked to see Chidinma and when she saw her, she told the little girl to follow her. On getting to the couple's house, Chidinma denied the allegation and was beaten up and stabbed with a broken bottle and smeared it with pepper. Chidinma's mother, hearing the cry of her child, rushed to the couple's house but found that the door was locked.

Seeing the harm they had done to Chidinma, the couple immediately fled their compound. They were later arrested by the Okokomaiko Police station and dragged before an Apapa Magistrate Court on a three count charge bordering on assault.

The case is currently in court.