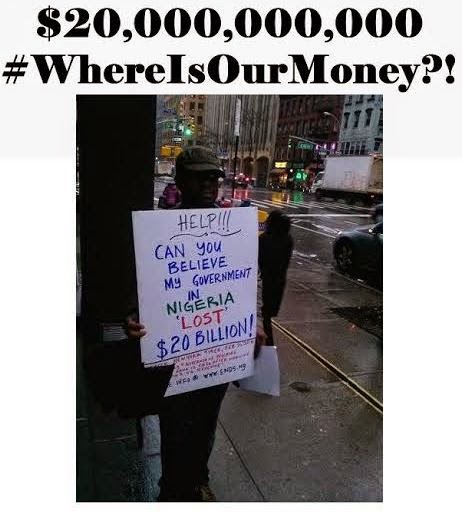 Over a year ago, Nigeria’s former central bank, CBN governor, now Emir, Sanusi Lamido Sanusi raised an alert on alleged missing billions ($) in oil revenue. By February, the figure was reconciled at $20 billion. We then began to ask, #WhereIsOurMoney?

The CBN governor explained that within the space of 18 months (only one-and-a-half years) examined, $20 billion was found not remitted by the National petroleum company, NNPC.

The breakdown of the missing revenue included $6 million looted daily via the kerosene subsidy scam run by oil minister Diezani Alison-Madueke. Kerosene supposedly subsidized to be sold at a rate of N40.9/liter, sold at pumps at an average of N156/liter to Nigerian families, with the Diezani-oil cabal looting N100+/liter through her handful of cabal portfolio middle-men marketers. With over 10 million liters kerosene sold/day, $6+ million is looted from the masses this way every day, totaling another $4 billion for the 18 months visited.

A forensic audit was ordered by the Jonathan government. The summarily results (full report has never been released) found that $1.48 billion was confirmed missing for the 18 month period reviewed. In the news today, NNPC has refused to refund this 1.5 billion dollars. The rest 4+ years of Jonathan’s administration are yet to be audited.

According to Leadership, “PriceWaterHouse Coopers (PwC) determined that $3.38 billion relating to DPK subsidy cost was incurred by the NNPC for the review period. PwC confirmed that there was indeed a Presidential directive issued on the 15th of June 2009 instructing that subsidy on DPK be stopped and that there was a correspondence between PPPRA and the CBN governor to the effect that ‘PPPRA had ceased granting subsidy on kerosene since the Presidential directive of 15 June 2009, but kerosene subsidy was appropriated for in the 2012 and 2013 FGN budgets.’”

From the above we see evidence of at least $5.5 billion dollars missing by the NNPC in 18 months reviewed. The Jonathan government has been in power for almost 6 years. At this rate of unaccounted-for billions, no less than $22 billion is ‘missing’ or ‘unaccounted for’ in the world of former Sinate president David Mark, from open NNPC processes only.

This calculation is just one more of several on the different channels of revenue looting, before, during and after petroleum is sold, that find holes in the bucket through which not less than $130 billion has been looted by the Jonathan-led cabal the last 6 years and over $600 billion by the enmeshed devilish elite cabal since independence [see Punch, 27/10/2014].