Defection to APC: Lamido & Aliyu Got It Wrong – Kwankwaso 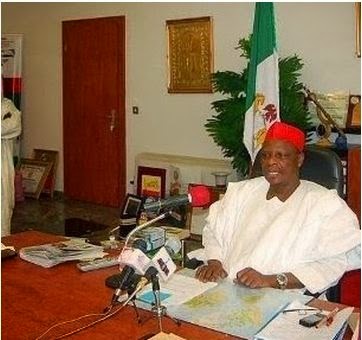 It seems more is coming out of the G7 struggle after the defeat of the PDP, as Kano State governor, Rabiu Musa Kwankwaso, has expressed his disappointment over the decision of the governors of Jigawa and Niger states, Sule Lamido and Banagida Aliyu, to stay back to PDP after their agreement.

In an interview with newsmen in his office, Kwankwaso, who is the senator-elect, Kano central constituency said it was a political miscalculation on the part of the two governors considering that the PDP was not in good shape at as the time they jointly took the decision to decamp.

Kwankwaso, who noted that both Lamido and Aliyu were behind the G7 struggle, added that the document prepared by Lamido during the formation of the G7, provided options of establishing a new party, getting into established party or joining All Progressive Congress (APC), but no option of going back to PDP.

“The G7 were embarrassed by what Lamido and Aliyu did, they can hardly be trusted with anything,” the governor stated.

According to him, in the eve of the struggle, they rejected all other options and chose to defect to APC, the party that waited patiently for their decision.

He thus declared that, “Lamido and Aliyu have gotten what they deserved.”

For Aliyu, Kwankwaso said the big blow he received from would have taught him a good lesson.

Kwankwaso predicted that governor Lamido of Jigawa and Aliyu of Niger in no distance time will join APC so as to work as one family for the betterment of the nation.