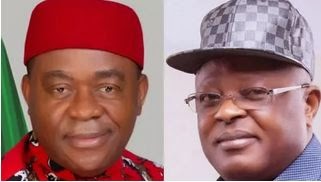 Announcing the result at the INEC’s headquarters in Abakaliki, the State Collation Officer and Vice-Chancellor of Nnamdi Azikiwe University, Prof. Joseph Ahaneku declared that Umahi has met all the constitutional requirement and returned elected.

The election, which was keenly contested by nine political parties in the thirteen council areas of the state was cleared by the PDP.

Meanwhile, the state governor, Chief Martin Elechi was defeated in his hometown in Ikwo council area.

There was wild jubilation across the stated the victory of PDP at the polls.