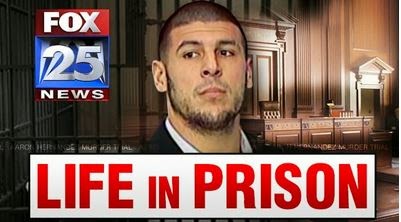 The Former New England Patriots was convicted of first-degree murder yesterday April 15th and was sentenced to life in prison without a possibility of parole. He will spend the remainder of his natural life in prison. How sad is this? He had a promising future but couldn't leave gang life alone.

The 25 year old was found guilty of first-degree murder in the shooting death of Odin Lloyd, a 27yr old landscaper and amateur weekend football player who was dating his fiancee's sister.