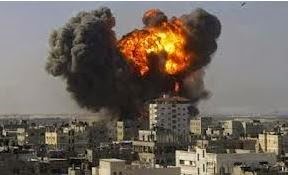 The house is the Lagos State residence of the Kogi State Deputy Governor. Mr. Yomi Awoniyi. The explosion was said to have been caused by a leakage from the cooking gas cylinder. Three occupants in the house, including Mrs. Awoniyi were said to have been trapped, while the driver who was outside washing cars was reportedly injured from the explosion. It was learnt that the four victims were later taken to St. Maria hospital, Yaba hospital immediately they were rescued.

A source said part of the building was badly damaged and collapsed following the explosion.


But the deputy governor in a statement by his Chief Press Secretary, Mr. Abu Micheal, said he and his family were not affected by the cooking gas explosion.

He stated that he was not in Lagos as at the time of the incident. The deputy governor said the domestic staff who has some degree of burns and the driver who was hit by part of the debris of the building are in stable condition and are responding to treatment. The South-West Zonal spokesperson, of the National Emergency Management Agency, Mr. Ibrahim Farinloye told journalists that the agency was alerted after the incidence.

He added that officials of NEMA including himself quickly went to the scene. According to him, they verified if victims were trapped underneath building. He said NEMA officials later evacuated the victims. Farinloye said, “The building collapse was suspected to have been caused by gas cooker explosion around 7:15 a.m this morning.
“The explosion and subsequent building collapse affected three occupants, who were inside the building at the time and the driver who washing the car outside. Although no life was lost, the four injured persons have since been evacuated to St. Maria hospital, Yaba, for proper treatment.

“Currently, the Police Anti-Bomb Squad and Police Disaster Management Unit are working on the site to get to the root of the explosion. “Afterwards, the Lagos State Building Control Agency will move in to determine the next level of action to take.”