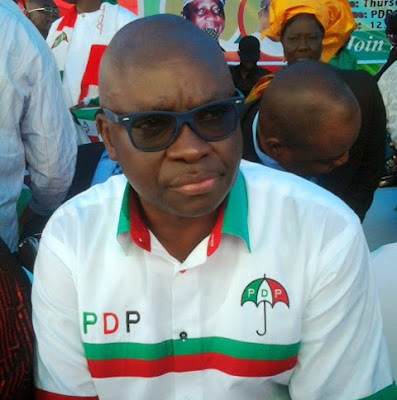 The General Over­seer of Faith and Victory Church, Akure, has predicted that Governor Olusegun Mimiko of Ondo State and his counterpart in Ekiti, Ayodele Fayose, will be impeached from office before the end of this year.

Prophet Oladipo, who predicted the victory of the presidential candidate of the All Progressives Congress (APC), Gen Mohammadu Buhari, said both Mimiko and Fayose have limited days left to spend in office as gover­nors of their respective states.

In an exclusive inter­view with Sunday Sun, Prophet Oladipo insisted that Fayose would be im­peached in six month’s time and his Ondo State counterpart in December this year.

According to him, Gov­ernor Mimiko had disappointed God who put him in the office and as such no amount of prayer could forestall his removal be­fore the end of this year. His words:

“God has re­vealed to me that Ekiti State Governor, Mr Ayo­dele Fayose, will be im­peached before the end of this year. Fayose will be sent packing from the gov­ernment house before the end of this year.”
“I predicted that Fay­ose would win the gover­norship election in Ekiti State and he won. But this time around, God has said that he would be im­peached from office and there is nothing he can do to prevent the fulfillment of that prediction. Either he agrees with me or not, Fayose is going to be im­peached because God has said it,” he stressed.He, however, advised Mimiko to be prayerful to avert the looming im­peachment. He said: “If Mimiko can pray very well, God can still have mercy on him because he is a beloved child of the Almighty God. But if he fails to pray, he will be im­peached before December this year.”