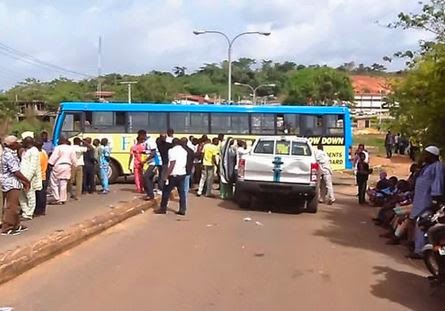 In response to the alleged impeachment move against Govenor Fayose by APC legislators, supporters of the Ekiti Governor and the Peoples Democratic Party (PDP) moved to the road leading to the assembly to hold “a meeting and picnic.”

The Nigerian Tribune reports that , the supporters’ action followed “strong, credible rumours” that the APC members of the assembly were planning to hold a sitting on Monday, to impeach Governor Fayose.

Members of PDP literally took over the roads leading to the Assembly complex, erected tents, set up a mini carnival and laid in wait for any of the events that had been rumoured.

They were at the venue under the watch of policemen, as well as men of the Department of State Security (DSS), who were in a total of nine Toyota Hilux vans and who took positions at the two entrances of the Assembly complex.

They danced to the music being supplied in front of the old Assembly complex, where they were restricted to by security agencies.

Some of them also sat quietly under the canopies erected in front of the old Assembly building, some meters away from the new complex.


Notable members of the PDP who attended the funfare held in front of the Assembly complex included the deputy governor, Dr Kolapo Olusola, former Speaker, House of Assembly, Mr Tunji Odeyemi, Special Assistant to the Governor on Information, Mr Lanre Ogunsuyi, his colleague in the Public Communications, Lere Olayinka, among others.

A member of the party told the Nigerian Tribune that they

“heard that the APC lawmakers planned to sneak into the assembly and we had to move our picnic to the Assembly complex and bring the deserted streets to life with our music.”

“The new Nigeria which President Goodluck Jonathan and Major-General Muhammadu Buhari all campaigned for is the one that would respect the rule of law. With this convergence, you can see that the people are standing by their governor. They are ready to defend their mandate.

“Nobody asked Omirin and other APC lawmakers not to come to the Assembly, they only decided to abdicate their duties since last year November 17. Impeachment procedure does not start and end with Assembly alone. The Judiciary is involved; so, this plan is highly condemnable.

“We want to emphasise that they are welcome, as long as they are concerned about making laws for the progress of the state, but if it was meant to come and impeach Governor Fayose, we won’t allow that.”

They will never succeed in Jesus name, that is why we don't want APC before! If they had leave him, there won't be casualties! Now a man as being killed in the process! This APC's are trouble!