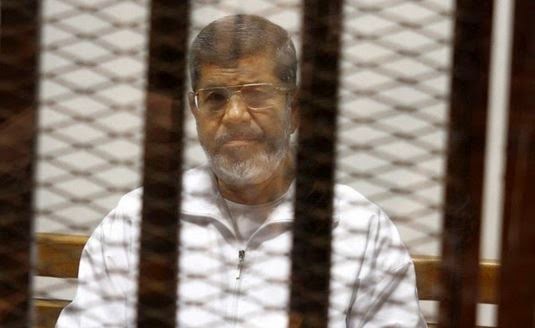 Egypt's ex-president Mohammed Morsi has been sentenced to 20 years imprisonment over 2012 killings today. This is the first ruling out of the several charges he is facing. Other rulings are still coming up...

63 year old Morsi, who was toppled by the then army chief and now president Abdel Fattah al-Sisi on 3 July 2013 amid mass protests,was standing trial along with many senior leaders of his blacklisted Muslim Brotherhood movement.

Morsi and 14 other defendants, seven of whom are on the run, are charged with the killing of three protesters and torturing several more during clashes in front of the Al-Ittihadiya presidential palace on 5 December, 2012.

The protesters were demonstrating against a Morsi decree that put him above judicial review when they clashed with his supporters.