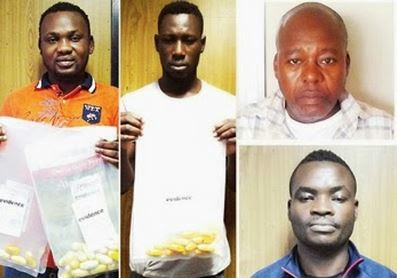 Four drug traffickers Ejiofor Eliezer (46), Obah Francis (30), Akpa Sobuzochukwu (27) and 36-year-old Ike Okechukwu all pictured above have been arrested by officials of the National Drug Law Enforcement Agency, NDLEA, after they excreted 171 wraps of drug that tested positive for cocaine at the Muritala Mohammed International Airport.

According to Punch, the men were apprehended during the screening of passengers on board Qatar and Emirates airlines enroute to Brazil. One of the drug traffickers, Eliezer, who excreted 100 wraps of the drug, when interrogated, said poverty pushed him into the illicit business.

“I live in Brazil, where I work in a supermarket and lived with my wife and four children. Life in Brazil is tough because I live from hand to mouth. It was poverty that made me to smuggle drugs. I took risk by swallowing 100 wraps of cocaine for N200,000 because of poverty.”he said

Another trafficker, Francis when interrogated said he ventured into drug trafficking to boost his meager salary he makes from his bakery job in Brazil. He said he would have made N2.8 million if he had succeeded.

“I am single and have been working in Brazil for two years. At present, I work in a bakery and my salary is meager. My plan was to give the drug to a friend in Dubai, but he did not come to collect the drug as planned. This was how I had to come to Nigeria with the drug. I blame my friend for my arrest because I would have made S15,000 (about N2.8m) from the deal.”he said

One of the traffickers, Okechukwu expressed his regrets

“I regret my involvement in drug trafficking. I dropped out of school in Junior Secondary School class two and I work in a toy company in Brazil,” he added

According to NDLEA Chairman, Ahmadu Giade, they would be charged to court soon.