Goodluck Jonathan and the Major Reasons He Lost the Nigerian Election 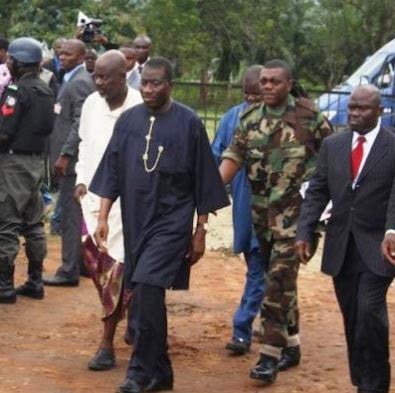 For the first time ever a Nigerian president has failed to win the popular vote. It’s a landmark for democracy, but where did it all go wrong for Jonathan?

Goodluck Jonathan misread the mood on the Chibok kidnappings and alienated all the wrong people.

For the first time ever a Nigerian president failed to win the popular vote. It’s a landmark for democracy, but where did it all go wrong for Jonathan?

Goodluck Jonathan has earned the dubious distinction of being the first president in Nigerian history to lose an election. In many ways, Jonathan was the architect of his own downfall. He made critical mistakes that turned the public and allies against him, and led them to gravitate towards the opposition. Here’s where it all went wrong:
1. Don’t cross the boss
When Nigeria emerged from 15 years of military rule in 1999, Jonathan’s Peoples Democratic party (PDP) was formed by wealthy retired generals to inherit power from the military. One of the godfathers was General Olusegun Obasanjo, who has governed Nigeria twice (between 1976-1979 and 1999-2007).

Jonathan made the mistake of alienating Obasanjo; leading the general to write a public 18-page letter containing lacerating criticism of the president in December 2013. A party member likened Obasanjo’s hectoring of Jonathan to a father’s disappointment with his son. Rather than make peace with the 77-year-old, Jonathan’s office retaliated.

Getting on the wrong side of Obasanjo is the political equivalent of crossing a mafia don....... You will pay.

Obasanjo’s attacks on Jonathan intensified. In February, an irate Obasanjo quit the PDP and dramatically ripped up his party membership card on television.

Jonathan was naïve to think he could remain president without the support of PDP godfathers like Obasanjo. Although Nigeria is no longer under military rule, many retired millionaire generals call the shots from behind the scenes.
2. Playing fair
Previous Nigerian presidents were too cynical to expose themselves to the unpredictable risk of a fair election. The election victories of PDP presidents during the past 16 years have been partially “assisted” by electoral malpractice. That changed when Jonathan nominated Professor Attahiru Jega as the chairman of the Independent National Electoral Commission (Inec) in 2010. Jega vowed to reform Nigeria’s electoral process to ensure free and fair elections.

The former university lecturer exuded calm authority and integrity. He has painstakingly prepared for the task over the past four years by studying the rigging methods used in previous elections, implementing an elaborate system of voter registration, training thousands of electoral staff, and introducing biometric readers to identify voters by reading their thumbprint.

Jonathan created the environment for the emergence of these changes and gave Jega the freedom and authority to conduct reforms that led to a credible election. But by giving Jega a free hand to play fair, he allowed Jega to craft the weapons that were used to oust him from power.
3. Boko Haram and the Chibok kidnaps

When Boko Haram kidnapped more than 200 schoolgirls from the town of Chibok in northern Nigeria, Jonathan failed to realise how much this would capture the public’s attention, both locally and internationally. His failure to speak about the kidnap for several weeks made him appear uncaring. These shortcomings were exacerbated by the behaviour of his wife, Patience, when she met the mothers of the kidnapped girls. Her ostentatious display and over-the-top emotions were mercilessly parodied.

Jonathan’s perceived casual indifference to the suffering of his people was compounded when he was photographed celebrating his niece’s lavish wedding just a few days after Boko Haram had killed 2,000 people in the town of Baga.
4. Bad management
Jonathan’s relations with party members at times resembled a football coach antagonising his star players into leaving for rival teams. His tendency to fall out with colleagues simultaneously weakened his party and strengthened the opposition. He quarrelled with one after another; leading several of them to leave the party in frustration and join the opposition All Progressives Congress (APC). The alliance between these and the opposition shoved Jonathan out of power.
5. Corruption and cronyism

Nigerians refer to their country’s resources as the “national cake” which must be shared by its citizens. There was a perception that Jonathan gave slices of the cake largely to members of his own community. Many powerful members of his government were from Jonathan’s region in the deep south of the country. Even Jonathan’s wife was appointed as a senior civil servant in his home state of Bayelsa.

Under Jonathan’s presidency many militant leaders from the oil producing Niger Delta area in the south have become very rich from government patronage and contracts. Some of them have been awarded security contracts to guard the oil installations they once protested against and attacked.

Jonathan has also pardoned a former ally accused of fraud and money laundering, increasing the cloud of suspicion hanging over his government.

These events caused deep resentment in other parts of Nigeria and created the impression that Jonathan ran a government that benefits those from his part of the country, the south, but not many others.

Jonathan even managed to get into a public feud with the governor of the Central Bank of Nigeria, the respected Sanusi Lamido Sanusi.

In February 2014 Sanusi alleged that $20bn of Nigerian oil revenue was unaccounted for. Rather than investigating the claims Jonathan fired Sanusi for his impertinence at publicly hinting of government fraud.

Buhari’s victory is historic and unprecedented. However Jonathan was responsible almost as much as Buhari was.
Culled from the Guardian