Home Gossip News If Oba of Lagos wants to play politics like us,he should leave the throne-Bode George

If Oba of Lagos wants to play politics like us,he should leave the throne-Bode George 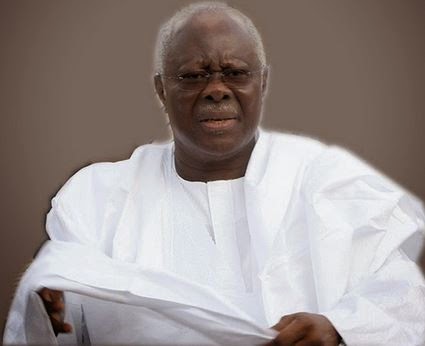 PDP chieftain, Bode George has also reacted to the Oba of Lagos threat to Igbos..At a press conference yesterday, Chief Bode who said he would go on exile as Buhari prepares to take over power said


“The Oba of Lagos is my friend but we belong to different political parties. I was shell-shocked when I heard the comments by my friend telling our Igbo brothers – because they decided who to vote for PDP – that he would curse them to run into the Lagos lagoon. By the grace of God that will never happen

“He said he owns Lagos. There is a need to draw a line between who a kabiyesi is and who a governor is. The kabiyesi is a traditional ruler and father of all. If he wants to play politics like some of us, he should leave that throne, come out and meet us on the field.

“We should not denigrate that office and use it as a political platform to deride other parties.”