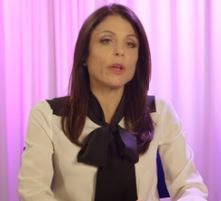 Bethenny Frankel gets candid about her sex life and says she wants to date African-American men in a new interview.

“I’m actively going on dates, but I’m not sexually active,” Frankel tells Us Weekly. In the wake of Madonna’s unexpected on-stage smooch with Drake, the reality star is asked with which star she rather have a kissing session. “I would make out with Drake, because I think I need to date someone who’s African-American.”

Watch video after the cut below....

Frankel then says, “I just think I need to broaden my resume.” While the “Real Housewives of New York City” star is known for her dry personality and makes the comments with a straight face, it’s not clear if she’s trying to be funny. Some past attempts at humor, such as wearing her little daughter’s clothing, did not go over well.

In the interview, Frankel goes on to claim that President Obama once congratulated her on her success, and that a White House staffer told her that not only does Michelle Obama love her, but also that the “West Wing loves Skinny Girl margaritas.” The “Skinny Girl” mogul also reveals the surprising age she was when she first had alcohol, and says the cast of “Saved by The Bell,” on which she was a production assistant, “all did fool around with each other.” She also talks about her “camel toe.” Check out the video below, and tell us what you think.