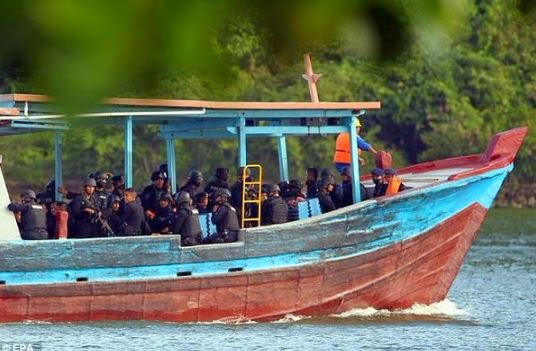 As many hope for a last minute miracle, it is apparent there won't be any as Indonesian firing squad were spotted heading for the prison where the condemned drug dealers are being held.They are to be executed by midnight..

A chilling TV re-enaction of what they executions would look like was aired last night..It was watched by millions and depicts the chilling process ..Australian, Sukumaran's mother, Raji, made a hugely emotional appeal for her son's life to be spared.

'I won’t see my son again and they are going to take him tonight and shoot him and he is healthy and he is beautiful and he has a lot of compassion for other people,' she pleaded.

How the execution is carried out as re-enacted on TV

The Bali Nine ringleaders who will face 12 marksmen, with only three of them holding loaded guns, at the stroke of midnight on Tuesday night - 3am Eastern Standard Time - in the depths of the jungle on Nusakambangan Island in Java.

The Australian men are expected to be led from their isolated cells in Batu prison through the wildly dense tropical forest up a 3km steep winding track to a place called Nirbaya - or more appropriately known as Death Valley.

The condemned pair will be given white clothing to wear, which symbolises the afterlife, before beginning their fatal trek and are given the option to be blindfolded with a piece of fabric before facing the firing squad who will be lined up anywhere from five to 10 metres in front of them.

The confronting decisions continue for the death row inmates with the opportunity to choose whether to stand, sit or kneel before a cross is placed over their hearts acting as a target for the 12 riflemen - of which nine will have blanks and only three will have live rounds. 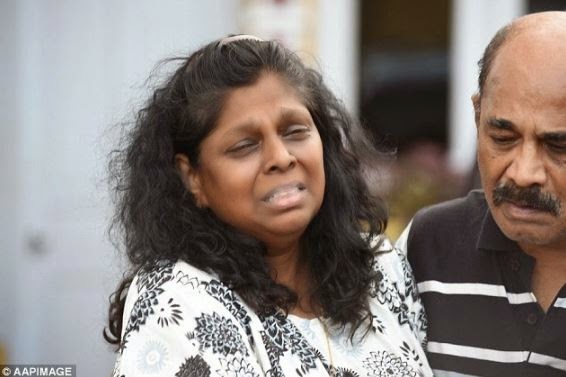 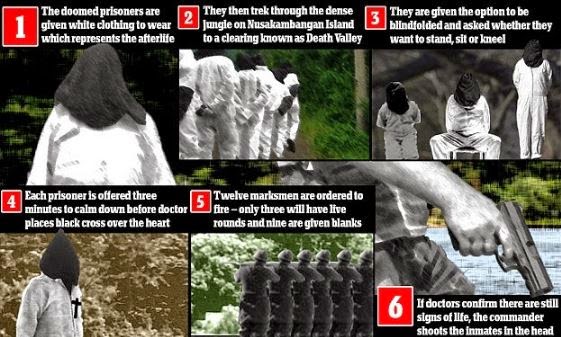 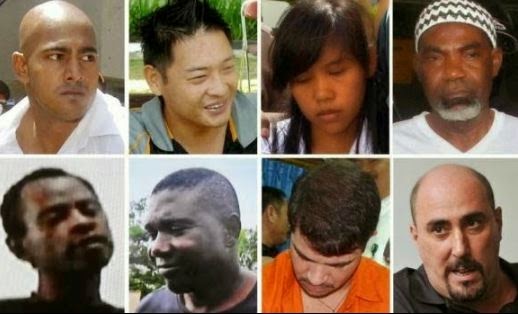 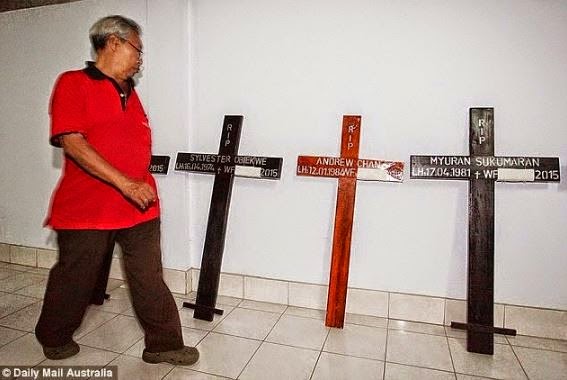 If necessary their hands or feet will be tied to a 3m high pole or worse still - a wooden execution chair.The offender is then given a final chance to calm down for a maximum of three minutes before the riflemen are ordered to shoot them in the heart.

It is then that the executing commander brandishes his sword as a sign for the 12 shooters to begin to fire their rifles.

If the doctor confirms once the fires have been shot that the prisoner is still breathing - the executing commander orders for a pistol be put to the temple just above the ear for a final shot.However, the shooting can continue on the condemned, if the doctor declares that there is still signs of life.

Some of the last words the men will hear are 'laksanakan, laksanakan' - meaning 'execute, execute' in Indonesian.