Jega gets ‘Certificate of Commendation’ from President Obama 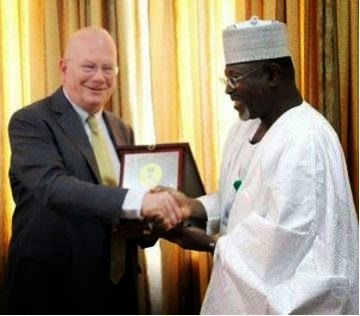 The manner Prof Attahiru Jega white-washed Elder Godsday Orubebe at the collation centre for presidential poll in Abuja after he put up a rascally conduct has attracted international recognition.

President Barack Obama of the United States of America has commended the INEC chairman over the way the Presidential and National Assembly elections were credibly conducted on March 28.

Obama, who awarded the INEC boss with a “Certificate of Commendation” for his outstanding and sterling performance, said what the Professor of Political Science had done deserves replication by all.

President Obama was represented by the US Ambassador to Nigeria, James Entwistle.