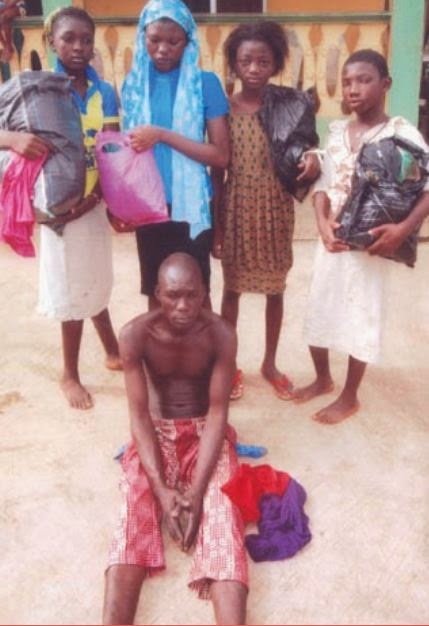 Pm news reports that, the suspect, Nurudeen Badmus, was caught by an acquaintance of one of the girls who demanded to know where the suspect was taking the children to early in the morning.When he couldn’t offer a satisfactory explanation, the aquaintance raised an alarm which attracted other members of the community.

Badmus was beaten seriously by the residents and was later taken to the local chief’s (Baale) house where he was interrogated.

The suspect told the Baale that he was taking the children to Ajah in Lagos State where he claimed they came from.

“They came to me for financial assistance to enable them go to Ajah in Lagos State. I was taking them to Ajah when somebody identified one of them. I am only assisting them,” the suspect told the large crowd at the Baale’s house.

The kidnapped girls, however, denied that they sought financial assitance from the suspect. They claimed that he picked them from the community and told them that their parents were witches and were planning to kill them.

One of the girls who identified herself as Jumoke confirmed that the suspect was taking them out of the community, adding that they didn’t know where he was taking them to.

“My name is Jumoke. I am 16 years old. Badmus lives near my house. He told me my mother was a witch and that she was planning to kill me. He said I should follow him to a town to escape being killed. He warned me not to tell my mother. I didn’t know the place he was taking me to. He also tried to rape me but I resisted him,’’ she narrated.

The youngest of the girls who gave her name as Nimota, 9 years old, said the suspect picked her on the road.

“He picked me on the road and told me that my mother was a witch and was planning to kill me. He said I should run away with him. I don’t know where he was taking me,” she said.

When the parents of the children arrived the Baale’s house, they were full of praises for the community. They identified the suspect as a neighbour, stressing that they didn’t know he was a kidnapper.The Baale of the community later invited the police at Sango Police Station where the suspect was taken and interrogated.