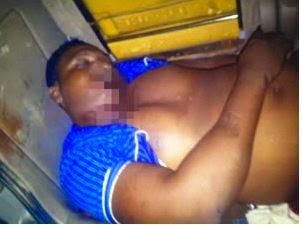 A suspected kidnapper, Niyi Omosola, has been shot dead by the police in the Epe area of Lagos.

Omosola was shot dead during a rescue operation by the police to free a victim, identified simply as Kudirat. Omosola, while collecting the ransom, sighted the police and decided to escape on a motorcycle when the operatives fired him. Omosola, who hailed from Ondo State, allegedly led a gang which kidnapped the woman in the Elemoro, Ajah area.

Sixty-two-year-old Kudirat was reportedly abducted by the gang on Thursday, April 16, at about 7pm. Kudirat, a businesswoman, was inspecting the construction work at a petrol station she owned in the area when the kidnappers swooped on her and took her away. The gang later contacted the family and demanded a ransom of N50m. However, after negotiation the gang and the family agreed to a ransom of N3m.

On Wednesday [April 22], Kudirat’s brother, who had been communicating with the gang, took the ransom to an agreed hideout in the Epe area. A team of operatives led by the Special Anti-Robbery Squad Commander, Abba Kyari, was said to have trailed Kudirat’s brother to the hideout. A police source said Omosola, while collecting the ransom, initially opened fire when he sighted the police.

The source added that when the kingpin saw that he was outnumbered, he tried to escape on a motorcycle, leaving the policemen with no choice than to fire him.

Omosola, who was injured, led the SARS operatives to a bush between Epe and Ijebu Ode, where the woman was held. When the police arrived at the hideout, his gang members had reportedly fled the place. Kudirat was rescued alive by the police, while Omosola eventually died from the gunshot injuries.