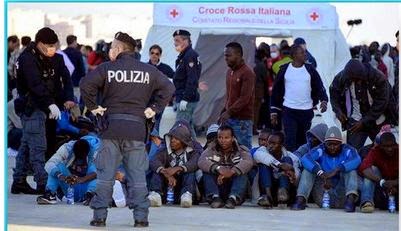 Italian police said Thursday they had arrested a group of African migrants after witnesses said they threw 12 passengers overboard following a row about religion on a boat headed to Europe.

The deadly dispute, which saw a group of Muslim passengers allegedly attack a group of Christian passengers, coincided with reports of a new migrant drowning tragedy.

Four days after a migrant shipwreck off the coast of Libya, in which 400 people are believed to have died, another 41 migrants were missing feared drowned Thursday after their dinghy sank en route to Italy, Italian media reported.

The stricken vessel was spotted by a plane, which alerted the Italian coastguard but by the time a navy ship arrived at the spot only four passengers were found alive, the reports quoted the police and aid agencies as saying.

The four survivors, who came from Nigeria, Ghana and Niger, said they were part of a group of 45 people that set sail from Libya.

A separate group of migrants rescued by an Italian vessel related a deadly standoff over religion in their dinghy, which ended in 12 Nigerian and Ghanaian passengers being drowned, the police said.

The victims were “Nigerians of Christian faith, compared to their attackers who were of Muslim faith,” police in the Sicilian port of Palermo said in a statement.