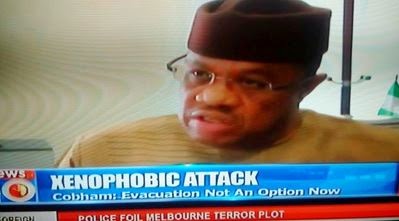 The Nigerian Ambassador to South Africa, Martin Cobham has ruled out the option of evacuating Nigerians from South Africa for now following strings of Xenophobic attacks.

"I will not want to subscribe to immediate evacuation. We want to look at this thing in three phases - The lower, middle and Higher threat. We can only appeal to our people to abide by the host country's laws, avoid indiscriminate clashes and violence and work with local authorities" he said

He also alleged that pictures and videos circulating the internet about the xenophobic attacks were false and that most of them are from occurrences in the Democratic Republic of Congo and Rwanda.

....Is this man waiting for the blood of Nigerians to be spilled by the unfortunate South Africans before her will realise its time? What happens to precaution measures?