NNPC Strong Men To Be Sacked, Accounts Probed By Buhari 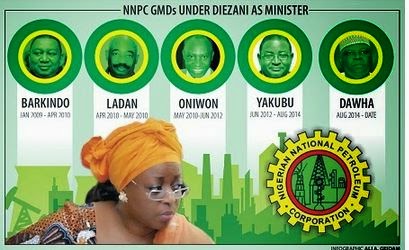 It will also review the accounts of the oil company to restore credibility, according to sources within Buhari's party, the All Progressives Congress (APC).

It said the new government will submit a bill to break the NNPC into four entities, as already prescribed in the latest PIB draft.
One APC source told Reuters that the Bill “will also, crucially, remove the minister of petroleum from the NNPC’s board of directors to curb political interference.”

Others said more generally that the minister’s current powers would be heavily trimmed.
Oil and gas will have separate companies for upstream, with a third covering pipelines and refining, while a fourth will be an inspectorate.

Reuters said oil firms keen to know how the new government plans to tax them could be waiting for a long time as the President-elect makes ending corruption and reforming the opaque national oil company his most urgent sector priority.

Four party sources in the APC told Reuters the issue of fiscal terms, seen as crucial by the industry, will have to wait on current thinking about oil and gas policies in Nigeria.

“We need to address the structural issues and leave the fiscal for now,” Senator Bukola Saraki, told Reuters.

“A more transparent NNPC is needed with reasonable accounting,” he added.

Buhari owes his March 28 victory against Goodluck Jonathan partly to a perception that Jonathan allowed corruption to get out of control - especially in the oil sector.