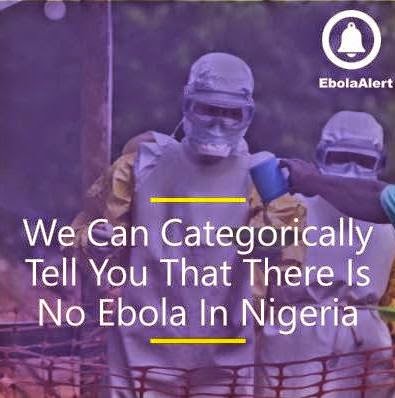 Residents of Lagos and environs have been urged to ignore a rumoured re-emergence of the dreaded Ebola Virus Disease, EVD, in Lagos. The rumour, which began trending on the social media late on the night of Friday April 10, 2015, threw a wide section of the populace into wild panic even as some residents began making preparations to leave the city.

Vanguard gathered that the purported message entitled “Ebola Returns to Nigeria after Killing 3 and infecting 12” , continued to circulate on Facebook, WatsApp and Twitter, into Saturday.

According to the report, one of the alleged victims, one Mr. George Lawal, showed major signs of the disease which caused neighbours to raise alarm.

“He was immediately taken to an undisclosed hospital in Lagos where he later died. Doctors confirmed he was struck with the Ebola flu. They are believed to have made major contacts with at least 12 people who are on the large. Please, share the news and report any suspected victim to nearby authorities,” the message stated.

But debunking the rumour, a health official and Ebola expert Dr. Lawal Bakare described the message as malicious and a figment of the imagination of the originator. Bakare, who is Founder and spokesperson for “Ebola Alert”, the official Ebola notification body for Nigeria, told Vanguard that the anatomy of the message in itself is false.

“We found a fast spreading false rumour of Ebola cases in Nigeria. The rumour was initiated by an irresponsible blogger who lied that there are cases of Ebola in Nigeria just to generate traffic to her website.We will need your powerhouse to help us tackle this rumour.

“In order to prevent what happened during the Ebola outbreak where people were told to drink salt water and some ended up losing their lives, we are doing this to let you know ahead of this rumor and to also tell your friends and neighbours.

The rumour is false; there is no known case of Ebola in Nigeria.”

In his argument, Bakare said the World Health Organization, WHO, in partnership with the Nigerian Centre for Disease Control and the Lagos State Ministry of Health, have trained hospitals across Lagos and other parts of the country on how to report any suspect case of Ebola.

“In fact, we had an extensive training and no health post nor hospital will call a blogger to report such information. “We will be one of the first to know if there is Ebola in Nigeria and be sure we will notify Nigerians through official and appropriate channels. Kindly help broadcast this as far as possible. Thank you,” he pleaded.

He urged Nigerians to visit the EbolaAlert social media platforms for regular updates and inquiry on Ebola around the world and also visit www.ebolaalert.org for daily updates.