Kidnapped Orekoya kids were actually found Naked in a Bag 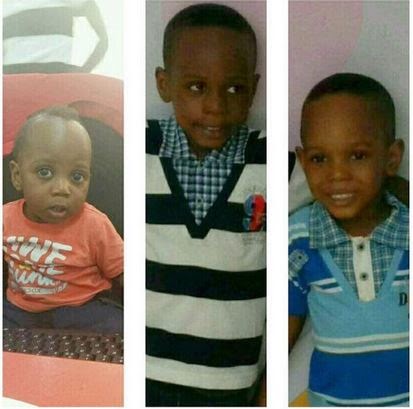 The Lawanson Road, Itire abode of the Orekoyas, whose three children were kidnapped by a housemaid last Wednesday, 24 hours after she was employed, became a Mecca of sorts yesterday, following news of their discovery.

The children, Demola, 6; Adedamola, 4, and Aderomola, 11 months, were reportedly found in an uncompleted building in Shasha area of Akowonjo, Lagos, Tuesday night, after an undisclosed ransom was paid into an account.

According to their maternal grandfather, Senior Apostle Abraham Adekunle, the children were found naked inside a bag. No arrest has, however, been made.

The abductors, as gathered, had sent an account number of an undisclosed bank to the Orekoyas.

The children, who had been ravaged by mosquitoes, were immediately taken to police hospital, Ikeja.

When Vanguard visited the Orekoya’s home yesterday, the children and their parents were yet to arrive from the hospital. Their grandfather, Senior Apostle Adekunle, described the eight days of his grandchildren’s disappearance as one of the worst challenges he had faced in his 67 years of existence.

According to him, “these eight days have been days of unrest for every member of my family.

“It all started after my daughter, Adebisi Orekoya, applied for a nanny through OLX (an online sales portal). On Monday (last week) one lady, who identified herself as Mary Akinloye, came for the job.

“My daughter took her to her place of work to introduce to her colleagues. Next day, Tuesday, she resumed work. But on Wednesday, she took my three grandchildren, leaving Michael, the eldest, a boarder who was on holiday, with information that she was going to get something.

“When Michael did not see Mary and his siblings, he contacted his mother by phone. My daughter in turn called her husband, who had to cut short his trip to Ibadan and return home.

“We went to Surulere division and Area ‘F’ to incident the case. Efforts to reach Mary on her phone proved abortive, as it was switched off. But she called next day to say she was with the children and demanded for ransom of N15 million.

“Since then we have been running from pillar to post looking for how to raise the money. Public-spirited Nigerians, family members and friends contributed.

“Aside that, we did not relent in prayers. There was no church around this area that I did not visit for prayers. In fact, in one of the prayer sessions, prophesy came that we would find the children today (yesterday).

“I have nothing else to say than to thank God for sparing the lives of my grandchildren.”

Also, elder sister to Mr. Lere Orekoya, Mrs Adesunbo Alabi, stated that when news of the disappearance of her nephews reached her, it was like a dream.

“At first , it seemed like a home theatre movie. I never believed until I came and saw my brother’s wife crying. I really appreciate my brother’s courage during this period because he encouraged us not to cry, that anything that happens to one in life is for a purpose.

“My joy knows no bounds today because the abductors demanded for money, where other victims were killed.”

When Vanguard visited the hospital , Mr. Orekoya was seen rocking Aderomola, the youngest child, to sleep with a lullaby: Row, row, row your boat, gently down the stream.

While Aderomola was on drip, the other two were playing.

The children described the kidnappers’ hideout as their new home, saying Mary cooked the meal they ate.

Efforts to get their parents’ reaction, yesterday, initially proved abortive as they said it was not a day for explanation.

Mr. Orekoya, however, said the family would brief the press at their home today.

After much persuasion, he simply stated that the rescue of his children was an indication that prayers worked.

“In one word, I will say that prayers work. We are happy that they are alive and well,“ he said.