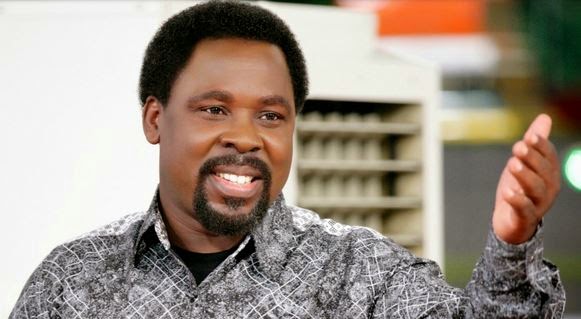 A video has surfaced showing Nigerian pastor, T.B. Joshua, warning South Africans of a “youth revolt” in their nation which would result in deaths of “certain people”.


“In the nation, South Africa, we should help them in prayer because I am seeing youth revolt,” the clip quotes Mr. Joshua as saying. “It will be very serious. A situation where youth will come out and… you learn that there is a protest. Some people were killed – certain people.”

Mr. Joshua’s prediction made the front cover of South African newspaper-based City Press newspaper in August 2013 when Julius Malema, the fiery leader of South Africa’s Economic Freedom Fighters (EFF), visited his church in Nigeria for “spiritual blessings”.
The clip was posted alongside a message from Mr. Joshua to South Africans.

“If we fail to see that there are powers that cause people to be bowed down in bondage, we are going to fight the wrong battle,” he wrote, in a statement posted on the Nigerian pastor’s official Facebook page, followed by over 1.5 million people.

The recent spate of xenophobic violence has spread to different South African cities, with thousands of foreign-owned shops forcibly closed and their owners seeking refuge in makeshift camps.

Five immigrants are said to have been killed, including a 14 year-old boy. Horrifying images and videos have surfaced online showing locals burning foreign nationals and looting their shops.

The violence erupted shortly after a purported statement from the Zulu King, Goodwill Zwelithini, calling on foreigners to return to their countries as they were causing economic “inconvenience” to locals.

T.B. Joshua’s television station, Emmanuel TV, is especially popular in South Africa where thousands of Christians annually go for “pilgrimage” at his church, The Synagogue, Church Of All Nations, in Lagos, Nigeria.