Home Gossip News See How the APC Sweeps out the PDP

See How the APC Sweeps out the PDP 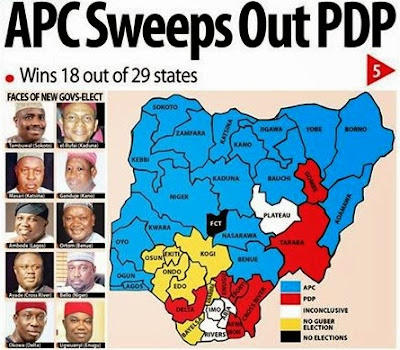 According to the results released by INEC, APC have so far won in 20 states while the PDP won in 9.

The 20 states won by the APC, according to INEC, are: 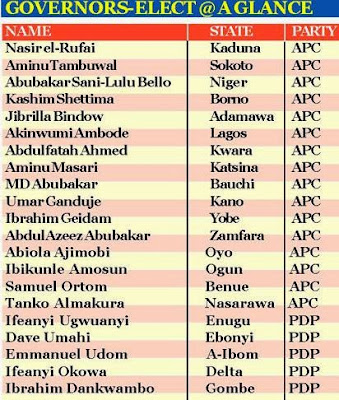 Lagos
In Lagos State, former accountant-general of the state and APC candidate in the election, Mr Akinwunmi Ambode, polled 811,994, votes to beat the candidate of the PDP, Mr Jimi Agbaje, who polled ‎659,788 to come second in the election

In a keenly contested poll, Ambode won by 152,206 votes and will take over from Governor Babatunde Fashola as governor on May 29, 2015, as the APC stretches its dominance in Lagos.

INEC returning officer in the state, Prof Isaac Adewole, who is the Vice Chancellor, University of Ibadan, declared Ambode winner of the election.

Meanwhile, the losing PDP candidate, Agbaje, has quickly congratulated his victorious rival. In his twitter handle, he wrote: “I just called Akinwunmi Ambode to congratulate him on his victory. I wish him well and pray he will be successful in guiding this state.”

Speaking later with Channels Television, he said he would not be running for governor again – after losing a second time, noting that there are other ways he could serve his community apart from being governor.

Niger
The APC candidate, Alhaji Abubakar Bello, is poised to be the next governor of Niger State following Saturday’s poll in the state.

From the scores announced by the time of this report, the APC candidate had polled 450,757 votes to lead Alhaji Umar Nasko of PDP who had only 171,856 votes.

The chief returning officer, Prof Abdulganiyu Ambali, announced that APC’s Bello had won in 17 LGAs while PDP’s Nasko had won in only one, Magama, LGA. Results of the remaining four LGAs were being awaited.

Nasarawa
In Nasarawa State, the APC candidate, Governor Umaru Tanko Al-Makura won the election after polling 191,463 votes to beat his major opponents in the race.

At the time of this report, Governor Al-Makura had won in eight of the nine local government areas whose results had been presented at INEC office in Lafia, the state capital.

His closest opponent, Mr Labaran Maku, won by a landslide in his own local government, Nasarawa Eggon, but fell short of replicating the feat in any other local government as he polled a total of 114, 674 votes.

Results from four of the 13 local government areas of the state were being awaited.

Making the declaration at about 07:12 pm at the Sultan Maccido Institute of Qur’anic and General Studies, Sokoto, venue of the State Collation Centre, the state returning officer, Professor Abubakar Abdullahi Bagudu, commended the people for their residence and patience.

Bauchi
In the same vein, Barrister Mohammed Abubakar of the APC won Bauchi State governorship election. He scored 654,934 votes to defeat his challenger, Auwal Jatau of the PDP who scored 282,650 votes.

Announcing the result, the state Chief Returning Officer, Prof Ayobami Salami, disclosed that the governor garnered 327,310 votes to beat his arch-rival and former state governor, Senator Rashidi Ladoja of the Accord Party who polled 254,522 votes.

Interestingly, the defeated governorship candidates of the PDP, Senator Folarin; Accord Party candidate, Senator Rashidi Ladoja, and Seyi Makinde of the Social Democratic Party lost in their LGAs to the APC.

Even before the final result was released, the PDP candidate, Folarin, had conceded defeat to whoever won the election. Folarin, in a statement aired on a private radio station in Ibadan, noted that with the results being released by INEC, his party could not win the election.

Delta
In Delta State, Senator Ifeanyi Okowa of the PDP was gradually coasting to victory at the time of filing this report, having won 10 LGAs convincingly out of the 11 so far released by INEC.

By this result, Senator Okowa had lost only one local government (Udu) to Labour Party candidate, Chief Great Ogboru, while others results were still being awaited.

According to the election results collated at INEC Kano office and read out by the state returning officer, Professor Hamisu Muhammad Abubakar, and compiled by our reporter at the INEC office, Ganduje polled 1,546,241, while PDP got 510,524.

At the time of filing this report Kano INEC collation officer for governorship election was yet to announce the winner.

Kaduna
Victory in the governorship poll in Kaduna State went the way of Malam Nasir el-Rufai of the APC who recorded a landslide win against the incumbent, Governor Mukhtar Ramalan Yero of the PDP.

The former FCT minister, who addressed journalists and a mammoth crowd at his campaign office in Kaduna shortly after he was declared winner by INEC, said that much responsibility had been reposed in him by Kaduna State people and he could not afford to let them down.

The candidate of the Labour Party, Dr. Mike Omotosho scored 2,973 to emerge the second runner-up.

The returning officer and vice chancellor of the Federal University of Technology, Minna, Prof Musbau Akanji, announced the results at the INEC collation centre in Ilorin, the state capital.

This is the first time in the history of Kebbi that the opposition has defeated a ruling party. The announcement was greeted with wild jubilation in the state.

Plateau
In Plateau State, results from 2 LGAs were still being awaited but in the results so far collated, it was a close contest with PDP’s Senator Pwajok ahead with 440, 547 votes while APC’s Simon Lalong was running him close with 419,607 votes.

In Imo, Governor Rochas was said to have been leading in 20 LGAs out of 27 LGAs,

In the result announced by the state’s returning officer, Professor Ibidapo Obe, Governor Okorocha polled a total of 385,071, while his closest rival and PDP’s Emeka Ihedioha scored 306,142.

The election was declared inconclusive because there were some perceived irregularities in results in some LGAs.

In Abia also, there was controversy after an international observer alleged irregularities in some areas, prompting INEC to declare the poll inconclusive.

Yobe
INEC has declared Governor Ibrahim Gaidam of the APC winner of the governorship election having scored 334,847 votes to beat former minister of police affairs, Adamu Maina Waziri of PDP who polled 179,700 votes.

The returning officer, Prof Ibrahim Njudi announced the result at the INEC headquarters in Damaturu, the state capital.

Protests broke out among APC supporters who protested what they termed flawed election in the state, forcing the police and other security operatives to launch offensive against hoodlums who took over part of Oron Road and other adjoining streets, who vented their anger on motorists and supporters of the ruling PDP.

Enugu
PDP’s Hon Ifeanyi Ugwuanyi was yesterday declared winner of the gubernatorial election held in Enugu State. He scored 482,277 to defeat the candidate of APC, Okey Ezea, who scored 43,837.

Results announced by INEC showed that Ugwuanyi won in all the 17 LGAs of the state. The APC has demanded the poll’s cancellation, saying no credible election took place in the state

Benue
APC’s Samuel Ortom was set to win the governorship poll in Benue State according to figures available yesterday.

The former minister had so far polled 394,047 to lead the PDP candidate, Terhemen Tarzoor who had 297, 724 votes in results collated from 22 LGAs.The result from Buruku LGA was being awaited.

Adamawa
The APC candidate Senator Muhammadu Umaru Jibrilla Bindow has won the election with 362,329 to beat SDP’s Engineer Markus Gundiri who got 181, 806 while PDP’s Nuhu Ribadu polled 98,917 to emerge third.

The result came with elements of surprises as Ribadu could not even win his home Yola South LGA.