''Surround Yourself with the ‘Right’ People'' - Father Mbaka Tells Buhari 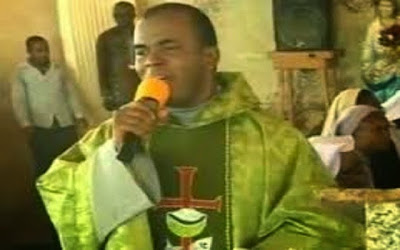 Mbaka, whose New Year Message, “From Goodluck to Badluck,” became a major talking point during the campaigns for the election, said Buhari’s emergence was a divine victory for all Nigerians.
Speaking through his spokesman, Maximus Ugwuoke, Mbaka also noted that Buhari’s victory was a fulfillment of his prophecy in the New Year Message.

However, he urged the President-Elect to seek divine wisdom before appointing people who will
work with him.

According to him, President Goodluck Jonathan’s biggest problem was that he surrounded himself with the “wrong people.” Mbaka advised Buhari to avoid making the same mistake.
The cleric’s spokesman said:

“It is with vindictive joy and glory to God that the Adoration Ministry, the nation and indeed the world saw the fulfillment of Fr. Mbaka’s New Year prophesy of change with the miraculous, victorious emergence of General Muhammed Buhari at the March 28th polls as the President-elect of the Federal Republic of Nigeria.

“We wish to restate that before President Goodluck became the President of this country, Fr. Mbaka prophesied it in his message titled ‘Okolo.’ Today again, Buhari’s victory, among other lessons it portends to Nigerians, has once more confirmed to all and sundry that Fr. Mbaka is indeed a true Prophet of God and that his New Year message was indeed from the Oracle of the Holy Spirit as he declared.

The ministry with magnanimous heart holds no grudges against anyone who attacked it in one way or the other at the rage of the controversies surrounding Fr. Mbaka’s message and view their actions as being orchestrated by their misconstruing of Fr. Mbaka’s prophetic calling.

The Ministry joins the rest of Nigerians to congratulate Buhari as God’s chosen instrument of change to tackle the myriads of problems facing Nigeria and pray God to endow him with the wisdom to go about this onerous task.
We see Buhari’s victory as divine victory to all Nigerians irrespective of our religious and ethnic divide.”Urging Buhari to seek divine wisdom before choosing the people he would work with, he continued:

“The prayer of Fr. Mbaka is that God will give Buhari wisdom not to surround himself with wrong people – that was the major problem Jonathan’s administration faced.
Fr. Mbaka has advocated that Nigerians should be patient with Buhari because the holes dug in the country are too much – holes of corruption, holes of unemployment, among others.”The cleric said he will be the first to condemn Buhari if he fails to live up to expectations.