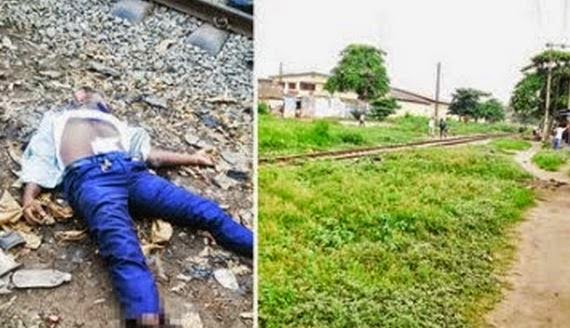 A 32-year-old architect, identified as Smith was crushed to death by a train as he hurried to work around 7am on Wednesday morning..The tragic incident occurred in the Cappa,Oshodi area of Lagos. Smith was said to crossing the railway tracks when he was hit.

According to eyewitnesses who spoke to Punch,the deceased, a devout Muslim, who was fondly called Alfa, could have been saved if help had come his way on time.A mechanic in the area, Biodun Adebanjo, said Smith had only recently had a baby with his wife.

“It was around 7am when he alighted from the bus he had boarded to Cappa. His workplace is just a few kilometres away. Immediately he alighted, he started racing towards the railway tracks, apparently he was in a hurry and was oblivious of the hooting of the train.

As he approached the tracks, an area boy wanted to grab him and stop him from crossing, but he thought he wanted to rob him and forcefully pulled himself away. By the time he realised the danger he was in, it was too late. He tried to turn back, but the train hit his right leg and slammed against his body.”

Another witness said immediately the incident occurred, symphatisers rushed to the scene and dragged him to the side of the railway tracks. He said the victim was still breathing, but in dire need of medical help.

He added that efforts to get emergency workers to come to the scene were abortive as they reportedly did not show up until 10am, about three hours after the incident.

Another witness, Austin Edi, lamented that policemen, who passed the area, merely looked and moved on.

“People kept calling the emergency lines, but they just said they were coming. Policemen around the area did not even make any effort to save the victim. It was around 10am that his remains were removed by an ambulance.”

It was learnt that the victim’s colleagues also came around and later informed his relatives about the incident.

Our correspondent visited Esther Oshiyemi Street where Smith worked in a construction firm as an architect. The office was locked.Some people around told our correspondent that the management of the company took the decision to mourn him.

A resident, Bisiriyu Oladimeji, described late Smith as a religious man, who was noted for his gentleness.

He said the information making the rounds that the victim blocked his ears with earpiece and was listening to music when the incident happened, was not true.

“I know him very well. I have not even seen him use earpiece before. He was soft-spoken and easygoing. We call him Alfa. It’s just unfortunate and nobody knows what he was thinking that blocked his mind,” he said.

A man, who declined to give his name, said no fewer than three people had died in recent times.

He attributed the incidents to frustration, appealing to the government to build demarcation fences and station train officials at the spot.