US Committed to Working with Buhari, Says Kerry 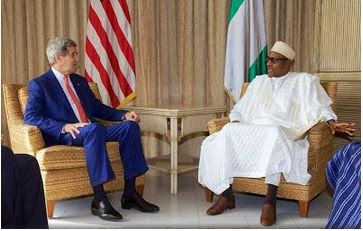 John Kerry, the United States secretary of states, has reiterated his country’s commitment to working with Muhammadu Buhari, Nigeria’s president-elect. In a statement released on Thursday by the US Department of states, Kerry congratulated “the people of Nigeria and the Nigerian government on historic and largely peaceful elections the weekend of March 28″.

He also applauded all voters for showing patience and demonstrating their commitment to participate in the democratic process.

“The United States commends Nigeria’s Independent National Electoral Commission (INEC) and its chairman, Attahiru Jega, on the generally orderly vote, on the use of technology such as card readers to increase the credibility and transparency of the electoral process, and on prompt communication of the results,” he said.

“While we note reports of logistical problems, such incidents did not undermine the overall outcome of the election.”

Kerry recalled that in January, he travelled personally to Nigeria to meet with both Jonathan and now President-Elect Buhari.

“At that time, I emphasised that for the United States, Nigeria is an increasingly important strategic partner and that Nigeria has a critical role to play in the security and prosperity of this continent and beyond.

“I also said that it was imperative that these elections are an improvement over past elections and that they need to set a new standard for this democracy. That means that Nigerians needed to not only reject violence but actually promote peace.


“We laud both President Jonathan and General Buhari for their public commitments to the Abuja Accord signed in January and reaffirmed March 26, respecting the official results, and encouraging their supporters to do the same.

“Finally, we extend our congratulations to President-elect Buhari. The United States reiterates its commitment to working with the newly elected government that emerges from this democratic process.”

Listen To The Phone Call Where President Goodluck Jonathan Congratulated Gen. Buhari below...