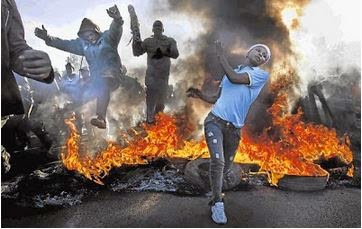 Speaking with the News Agency of Nigeria (NAN) from Pretoria, South Africa, Anyene said the mechanic workshop of a Nigerian was completely destroyed early on Friday in Johannesburg.

“In the early hours of today, the mechanic workshop of a Nigerian, with 10 cars and all the tools inside, was destroyed by some South Africans,” he said.

He said the the attackers defied the presence of the police to carry out the attack.

“The attacks are spreading and Nigerians do not sleep again. They keep vigil to ensure that they are not taken unawares. There is tension everywhere. Nigerians have closed their shops for fear of being attacked.”

While confirming that no Nigerian has been killed, Anyeye called on Nigerian and South African government to reach and understanding to protect Nigerians in South Africa.

However, Minister of State for Foreign Affairs, Mr Musiliu Obanikoro, has assured Nigerians in South Africa that all will be done to restore peace and safety of their lives and property in the country.

Speaking to journalists in Abuja, Obanikoro said there is ongoing cooperation with South African authorities to keep the situation under control.

The Minister, however, addressed the social challenges that are underlying causes to the xenophobic attacks such as poverty and ignorance.

It is sad that Africans can exert such inhumanity against themselves at this time when growth is needed most in the continent, he said.

Obanikoro also commended the group of South Africans that protested against the attacks. He said that more of such interventions are needed to reduce and eventually eliminate such xenophobic tendencies.

On April 13, the Malawian government said it would help repatriate its citizens from South Africa following the outbreak of xenophobic violence in the eastern port city of Durban.

South Africa’s Minister of Home Affairs, Malusi Gigaba and the Premier of Kwazulu Natal, Senzo Mchunu, have held a town-hall meeting with members of various communities as part of efforts to resolve the crisis.

A high crime rate and a lack of jobs, among other things, have been blamed on foreigners by some indigenes. A recent statement by the Zulu King, Goodwill Zwelinthini, on too many foreigners in the country has not helped. The king has since said he was quoted out of context.