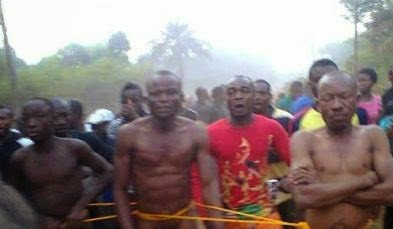 Twenty-one young men under the age of 25 have been arrested in Nigeria for being in a 'gay cult'.The young men, who were caught with 122 condoms between them, were held in an Ibadan police station last week.

According to Gaystar news,when police flooded the house, the officers accused them of holding an 'initiation' ceremony into their 'evil' group.

They had no formal charge against them, but relied on the presence of the condoms with no female present. They also claimed they received a tip saying the occupants of the room were gay.
dddddddddddddddddd

The organizer of the event told officials that it was actually just a birthday party and they had nothing to do with any 'cult'.

All 21 were immediately taken into the police station.Human rights organization The Initiative for Equal Rights (TIER) received a call on 10 May and immediately started helping the young men.

'At the point of arrest, the young men were physically assaulted and treated in a manner unbecoming of any legal process: they were photographed in their underwear, made to write statements under duress and locked up in an overcrowded cell.'

While the police wished to refuse bail and transfer the case to the state courts, a lawyer from the International Center for Reproductive Health and Sexual Rights (INCRESE) managed to allow them to pay for their freedom.

They did not want to appeal against their treatment in case it would lead them to being outed and branded as gay.

While 11 had family and friends to bail them out, 10 were left in detention.

When all 21 returned to the police station on Thursday (14 May), it was alleged the police further extorted more money from each of them before they were allowed to leave.