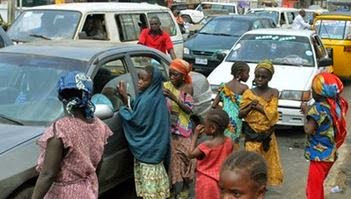 Speaking in an interview with journalists, a relative of the girl’s mother, Mrs. Maryam Abdulganiyu, said the girl was found in a worship place, popularly called Ori-Oke at Basin area of Ilorin, being used by the suspect for begging.She added that the suspect had claimed that she used the proceeds from the alms begging to feed and clothe the girl.

Vanguard gathered that the girl was declared missing on March 25 by her parents, who reside at Old Shao Garage, Ilorin.

Father of the girl was said to have approached a cleric at Ori-Oke. While the search for the girl was on, her grandfather, Mallam Isa, went to the same Ori-Oke to worship and saw the septuagenarian with the missing girl.

He was said to have alerted the man of God in charge of the centre that he had seen his missing grandchild with an unknown person.They accosted the woman, who claimed the child was her grandchild. An argument followed and t he matter was reported to the police at Basin Divisional Police Station, Ilorin.

Police reportedly detained the two persons laying claim to the child and another suspect, while investigation into the matter was still ongoing.

However, relations of the victim requested the police to probe the suspect thoroughly, saying the girl appeared to be psychologically imbalanced and could hardly remember her name.

Contacted, the Command’s Public Relations Officer, Mr. Ajayi Okasanmi, who confirmed the arrest, said the victim had been released to her parents.