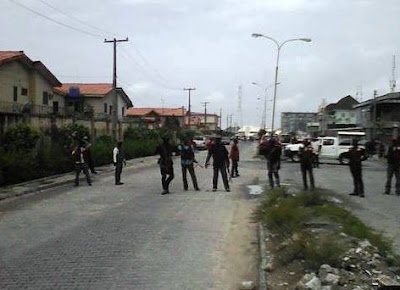 After six long nightmarish days and nights that the agents of the National Drug Law Enforcement Agency (NDLEA) laid siege to the Lagos residence of senator-elect, Prince Buruji Kashamu, despite valid and subsisting court orders directing them to vacate the place, we are pleased to announce that they have left the facility. They left at exactly 7:45pm.

But this was after the agency displayed a high level of brigandage and lawlessness that is only fit for a failed state.

However, we thank the almighty God for His infinite mercies. He is the one who thwarts the plans of the crafty, so that their hands achieve no success.

We also salute the judiciary for once again rising to the occasion and proving yet that it is truly the last hope of the common man and the oppressed. We are grateful that the judiciary has again affirmed Prince Buruji Kashamu’s innocence of the charges against him, thus turning for good what was meant for evil.

Our appreciation also goes to the media, civil society groups, student bodies and all well-meaning Nigerians for their prayers, support and solidarity during the period.

After attending to his health, Prince Kashamu will address the media, Nigerians and the whole world on his ordeal and the intricate web of political intrigues behind the wicked attempt to abduct him for no just cause using the instrument and machinery of state.

Until then, we hope we can truly say the siege is over!