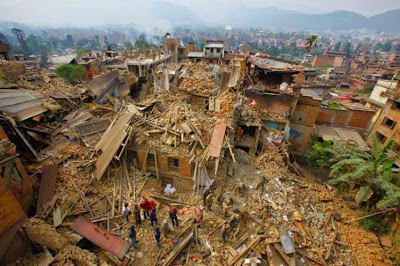 Weeks after a devastating quake killed more than 8,000 people and destroyed hundreds of thousands of homes,another strong earthquake shook Nepal on Tuesday, sending people in the capital Kathmandu rushing out on to the streets , eyewitnesses said.

The U.S. Geological Survey said the quake had a magnitude of 7.1 and struck 68 km west of the town of Namche Bazar, close to Mount Everest.

"This is a really big one," said Prakash Shilpakar, the owner of a handicrafts shop in Kathmandu who was trying to call his parents in the town of Bhaktapur, devastated in the April 25 quake.

Shockwaves were felt across northern India and as far away as the capital New Delhi, where buildings swayed for more than a minute and people scurried into the streets.

People in Kathmandu rushed outdoors, Reuters reporters said. There were no immediate reports of damage to buildings. Shopkeepers closed their shops.