Boy Smuggled in Suitcase From Morrocco to Spain [PHOTO] 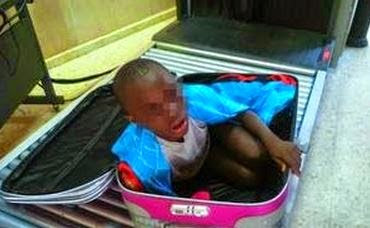 An eight-year-old boy has been found hidden inside a suitcase by customs officials at the border between Morocco and Spain.

Officers discovered the boy after they put the small suitcase through an X-ray machine and spotted the child curled up inside a hard wheel-along case.

A 19-year-old woman was responsible for the luggage. Police noticed her after she began to look nervous going through security.

She was pulled to one side, with police suspecting that she could have been smuggling drugs, and her luggage was then scanned.

The boy was immediately visible from the X-ray and was removed from the suitcase immediately.

Upon realising he had been discovered, the boy poked his head out and said, in French, "Hello, my name is Abou."

The discovery was made in the Spanish border city of Ceuta. Officers have suggested the boy could have suffocated in his bid to escape over the border into Spain.

"This could have had a tragic end," according to a member of the Civil Guard.

The child was treated by the Red Cross and has now been taken into custody by social services.

Police have arrested a man from the Ivory Coast, thought to be the boy’s father and are investigating the incident further.

The 19-year-old woman is believed to have been smuggling the boy for a large fee.

It is not unusual for human-smuggling attempts to be discovered at this border. Hiding a child in a suitcase is, however, unusual.