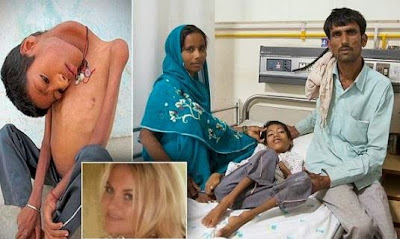 A boy whose head hangs at a 180-degree angle is set to go under the knife thanks to an 'overwhelming' response from doctors and donations of more than £10,000 from around the world.

Dailymail reports that,Mahendra Ahirwar, 12, who suffers from a rare condition that makes his neck bend and his head hang from his body, faced a bleak future before his story was publicised last month.

His once-desperate parents, from Madhya Pradesh in central India, had admitted they would rather watch their son die than continue to suffer, but have now thanked doctors and members of the public for their generosity.


Mahendra, whose weak backbone means he can't stand or walk and is restricted to a sitting position, is currently at Apollo Hospital in New Delhi, awaiting confirmation of life-changing surgery.... 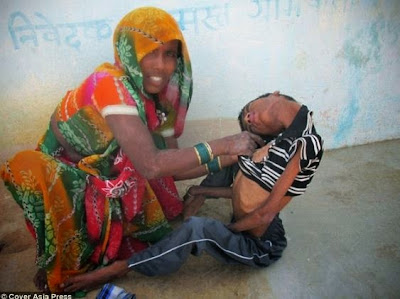 Dr Rajagopalan Krishnan, a senior consultant and spinal surgeon, is hopeful he can improve Mahendra’s life. He and a team of doctors have offered the surgery at no charge to the family.


‘I’ve done a preliminary review of the child's clinical status and we now have a working diagnosis and once I have completed a few more studies, I am pretty sure that I can correct his disability by surgery in the not too distant future. 'At the very least, I am certain that I can improve his quality of life and he will be able to look at the world straight rather than upside down.‘I just feel sad that nothing was done for this boy for 12 years of his life.'