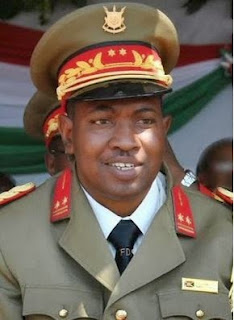 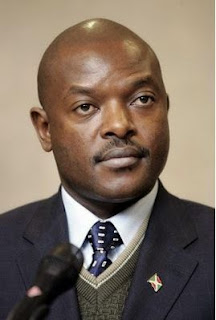 According to reports, Burundi's army general Godefroid Niyombare (left) has announced a coup against President Nkurunziza (right). Says he no longer recognizes Pierre Nkurunziza as President following massive protest and unrest over his bid to be re-elected for a third term.

According to the army chief, the army is working with civil society groups, religious leaders and politicians to form a transitional government. He told reporters at a military barracks that the president had violated the constitution by seeking a third term.

In a radio broadcast, Niyombare said;

The masses have decided to take into their own hands the destiny of the nation to remedy this unconstitutional environment into which Burundi has been plunged.

"The masses vigorously and tenaciously reject President Nkurunziza's third-term mandate President Pierre Nkurunziza has been relieved of his duties. The government is overthrown." he said.

In a swift reaction, the office of the president has rubbished the general's declaration, calling it “a joke”. The president is in Tanzania at an African summit to discuss the crisis in his country

After the army general made the announcement, crowds who had earlier been out on the streets of the capital protesting against the president began cheering and celebrating his dismissal.