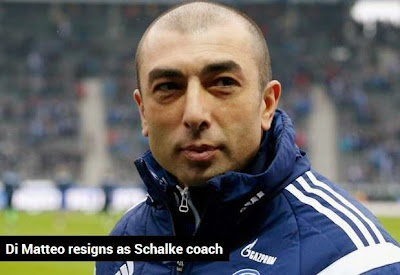 Roberto Di Matteo has resigned as coach of Schalke, the club have confirmed.

The former Chelsea coach steps down from his role just seven months after his arrival in Gelsenkirchen.

Reports this week suggested the 44-year-old had been sacked, but the club have confirmed Di Matteo has chosen to step down from his role following a disappointing season.

"Di Matteo was always thinking about the sake of the club. The reports that emerged on Sunday that we fired him were not true," said sporting director Horst Heldt.

Schalke sat 11th in the Bundesliga when Di Matteo was made coach in October last year.

He led the club to a narrow Champions League last-16 defeat to Real Madrid, but failed to secure qualification for the tournament next season after only managing to finish sixth in the Bundesliga.

"[Sporting director] Horst Heldt and I have not only looked back at the last seven months but also looked ahead at the upcoming season," said Di Matteo.

"I laid out my plan for a potentially successful future and I pointed out which means were necessary for achieving our goals. Although those talks were always constructive it was clear that the club wanted to go for other key aspects.

"For me, a new start seems to be the best solution for all parties involved because of the burden of the unsatisfying second half of last season and because I cannot guarantee that I can lead the club to the successes it expects under these circumstances.

"That is why I came to the decision to quit as the coach."