Female Boss Kidnapped By Her Driver In Lagos 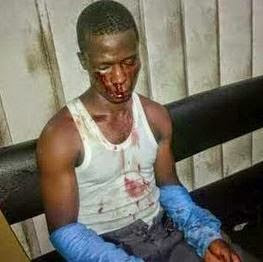 Sometimes if you consider the way people behave, you will find it difficult to remain a good person.

A suspected member of a kidnap syndicate arrested in the Ajah area of Lagos State has confessed that his gang was hired by the driver of their victim, one Obinna Akammadu.

He disclosed that Akammadu, the driver, informed him and his colleagues, now at large, that he was going to pick his boss, owner of Victoria Water Service, from the airport last Saturday.

According to him: “The plan was that we would kidnap the woman on reaching Lekki, take her to a hide out around Ajah/Epe, from where we would call her relatives and demand for ransom.”

He said they had succeeded in kidnapping the woman, but ran into traffic at Ajah. The woman jumped out of the car and raised alarm.

The suspect, identified as Solomon Ugoji, was reportedly rescued from a mob that was about to lynch him, by policemen attached to Area ‘M’ Command, Ajah.

Narrating her ordeal to police, the woman that was almost kidnapped, expressed surprise over what she said appeared like a movie scene to her.

She said: “I was shocked when the men opened the door that was supposed to be locked. But for God’s intervention, I do not know what would have happened to me.”

Lagos State Police PRO, Kenneth Nwosu, confirmed the incident. He said policemen on patrol noticed the struggle in the vehicle and intervened.

Policemen are on the trail of the driver and others involved in the crime.