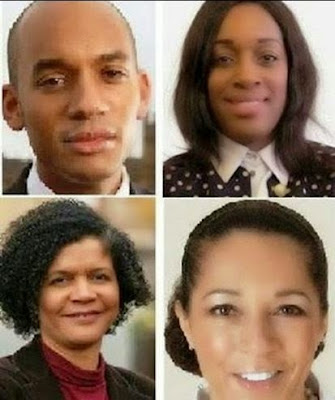 Four Nigerians have won seats in the British parliament to represent their constituencies.

Umunna is a member of the British Labour Party and has been a member of Parliament (MP) since 2010.

He is from Nigerian Igbo ethnic group and the current Shadow Business Secretary since 2011.

Another Nigerian, Grant, a lawyer, born on September 1961, won her seat under the British Conservative Party.

She is the current Member of Parliament for Maidstone and The Weald in Kent and the current Minister for Sport, Tourism & Equalities.

She was elected at the 2010 general election, replacing the constituency’s previous incumbent, Ann Widdecombe, who had decided to step down as an MP.

Grant was the first black woman to be selected to defend a Tory seat and her election made her the Conservatives’ first female black MP.

Onwurah won her seat under the British Labour Party.

She was elected at the 2010 general election as the Member of Parliament for Newcastle upon Tyne Central, replacing the previous Labour MP Jim Cousins, who decided to step down and left the seat. She is Newcastle’s first black MP.

Another Labour Party member, Osamor is the representative of Edmonton constituency in London. She won the seat after stiff contest with fellow diasporan Kate Anolue.

Ms Osamor, who has worked for the NHS for 15 years, is a trade union activist, a women’s charity trustee and a member of the Labour Party’s National Executive Committee. She made funding the NHS, opposing its fragmentation and standing up to government cuts the centrepiece of her campaign.

History was also made in the election, as a 20-year-old Scottish student became Britain’s youngest lawmaker since 1667, ousting one of Labour party’s top figures in the process.