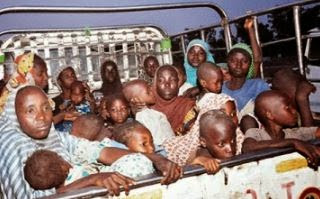 Rescued women have described the horror they faced while under Boko Haram captivity..They revealed Boko Haram fighters killed older boys and men in front of their families before taking women and children into the forest where many died of hunger and disease.With nearly 700 freed by Nigerian military,the women spoke to Reuters


"They didn't allow us to move an inch," said one of the freed women, Asabe Umaru, describing her captivity. "If you needed the toilet, they followed you. We were kept in one place. We were under bondage.

"We thank God to be alive today. We thank the Nigerian army for saving our lives," she added.


"When we saw the soldiers we raised our hands and shouted for help. Boko Haram who were guarding us started stoning us so we would follow them to another hideout, but we refused because we were sure the soldiers would rescue us,"

The prisoners suffered malnutrition and disease, she said.

"Every day we witnessed the death of one of us and waited for our turn."

Another freed captive, Cecilia Abel, said her husband and first son had been killed in her presence before the militia forced her and her remaining eight children into the forest.

For two weeks before the military arrived she had barely eaten.


"We were fed only ground dry maize in the afternoons. It was not good for human consumption," she said. "Many of us that were captured died in Sambisa Forest. Even after our rescue about 10 died on our way to this place."

The army said troops on patrol on Saturday had discovered 260 women and children in Adamawa state. Some had fled their homes during fighting while others had been abducted but managed to escape from the Islamists.

Umaru said her group of prisoners never came in contact with the missing Chibok girls.