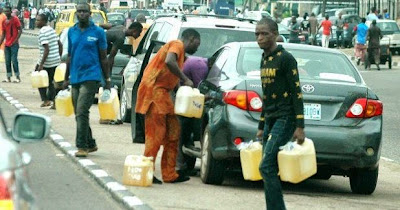 The lingering scarcity of petroleum products in the country which has caused petrol to be sold at between N4, 500 and N5, 000 per five litres has forced Nigerians to source the product from Cotonou.

The News Agency of Nigeria (NAN) reports that the country which is the world’s sixth largest oil producer has been in fuel crisis for more than two weeks.

On Monday, petrol sold for between N4, 500 and N5, 000 per five litres along the Lagos-Badagry Expressway as black marketers claimed they sourced the product from neighbouring Cotonou in the Republic of Benin which is not an oil producing country.

NAN also reports that hundreds of passengers were stranded at bus stops while vehicle owners groaned under the high price of the products occasioned by the ongoing strike by petroleum marketers.

A petrol hawker, who identified himself as Simpson Samuel, told NAN that he bought five litres from Cotonou and resold it for N5, 000 in Lagos.

“We have been at filling stations along this Badagry road, but we did not get fuel. Some of our colleagues directed us to Cotonou and that is where we bought these ones.

“Many people who have also gone there cannot buy because of the rush by our people,’’ Samuel said.

At a filling station located at the Agric bus top, along the Badagry Expressway, fuel was sold for N300 per litre.

Johnson attributed the leakages in the nation’s revenue to the importation of refined petroleum products.

He added that the situation was creating jobs for the nations Nigeria was importing the refined product from and causing unemployment for Nigerians.

According to him, the continued importation of refined petroleum products was putting the Naira under pressure and creating social problems for the economy.

He said that there was the need for stakeholders to meet and fashion out a strategy to be adopted in stopping the importation of petroleum products.

NAN reports that the Chairman of Capital Oil, Mr Ifeanyi Uba, had on Sunday promised to release 13 million litres fuel which amounts to 400 tankers of fuel.

He also promised to release 70 million litres subsequently, while denying knowledge of the ongoing strike by petroleum marketers and tanker drivers.

Uba said it was sad that Nigerians, especially those that provided healthcare service were suffering because of the scarcity.

Meanwhile, banks and other financial institutions have announced that they would close business at 1 p.m. because of the situation.

The telecommunications companies have also announced closure of some of their services from today till the situated improves.