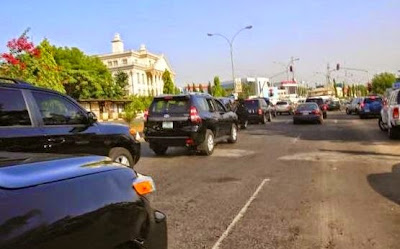 President elect, Gen. Buhari has reportedly ordered aides and security personnel attached to him to always obey traffic regulations during all his movements in any part of the country. In a statement released and signed by his media team in Abuja yesterday May 6th, Buhari said leadership without example will cause ordinary citizens to copy the lawlessness of their leaders. Above is a picture of his convoy waiting at a traffic light.


"Without leadership by example, the ordinary citizens would become copycats of the lawlessness of their leaders”

He went further by stating that “arrogance of power, lawlessness and disregard for the rights and convenience of fellow citizens would have no place in his government”.

He said in a democracy, leaders should not inconvenience their citizens or cause them to experience unbearable ordeals for their own comfort.

The President-elect advised his military and police security personnel to be in tune with his philosophy of “bringing the rule of law in the conduct of leaders during their movements on public roads.”

...I am falling in love with Sai Baba day by day..#NoHomo...But the man is making sense