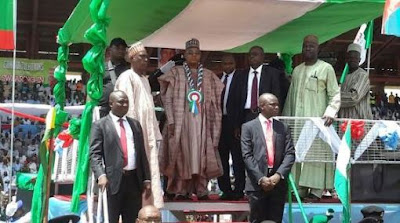 Newly sworn-in Governor of Borno State, Kashim Shettima, on Friday said his new administration would, among other policies, pursue amnesty for members of Boko Haram who are ready to de-radicalise.

Mr. Shettima, who took an oath of office to serve for yet another four years alongside his deputy, Zannah Mustapha, said he would lobby the new federal government of President Muhammadu Buhari to consider granting amnesty to the militants.

“I do not intend to spoil the celebration mood today but I simply cannot ignore the fact that as we are gathered here, looking good and so full of excitement, thousands of our fellow sons and daughters of Borno, old and young, including babies that are few days old, are displaced in their own land and country,”

“We have gone through the most savage insurgency of the Boko Haram sect, which massacred thousands of our people; especially destroying the cream of Borno youth and ensuring that into the next generation, we will be faced with a demographic crisis that will challenge our creative ingenuity, to overcome,” he said.

Mr. Shettima lambasted the government of Goodluck Jonathan, referring to it as “a hostile Federal Government, which lived in denial about the savagery of Boko Haram and which also saw the insurgency from the most perverted, narrow and irresponsible prism, that somehow, the insurgency had been fuelled against it, by the political and other elites of this part of Nigeria.”

“They therefore did only the barest and most perfunctory, to stem the problem. Meanwhile, our people suffered and our communities were systematically laid to waste,” he said. “Democracy became the saving grace for the people.

“With our votes, we threw out a government at the centre, which did not work in the national interest and have now voted into power, President Muhammadu Buhari, who is also being inaugurated into power today in Abuja.”

He also reiterated his readiness to give members of Boko Haram a chance for amnesty.

“Unless we want to engage in an endless war of attrition that will be hallmarked by the continuing destruction of lives and property, it becomes imperative that willing members of the Boko Haram sect that want to come out of the bush must be given the opportunity to be de-radicalized and then rehabilitated to become useful citizens of society,” he said.

“It is never easy to accept back into the community, those who have taken up arms, killed, pillaged, raped and destroyed. But in the long run, society must make very expensive choices for peace, reconciliation and development. We are therefore appealing to the Federal Government of Nigeria and the International Community to assist our endeavour in that regard.”