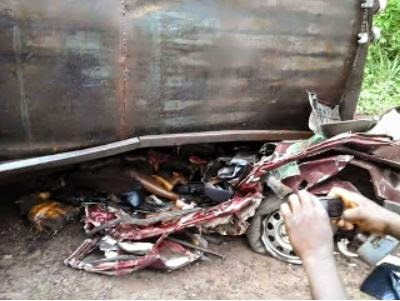 As residents of Otukpa, Ogbadibo LG of Benue State try to recover from the shock that gripped the community on Sunday evening over an auto clash which claimed lives of students and other commuters; a certain man from the local government (name withheld) has come out with a surprised revelation.

According to the man, his daughter left home on Thursday evening after been settled for the Semester.

He went further to say the entire household was rest assured that the lady was already in school and had settled down for the academic semester, only to find her corpse amongst the fresh accident victims on Sunday in Otukpa.

“We all believed she was in school since on Thursday. What was she doing in Otukpa for the past 3 days? Why is her corpse lying amongst those accidents victims here?”, he asked rhetorically while lamenting.

A tanker laden with diesel product had on Sunday evening rammed into a Volkswagen car which took off from Otukpa and was heading towards Ugbokolo in Okpokwu LG, crushing the vehicle to a palm and killing all the occupants in the car.

No rescue was made as the men and Officers of the Federal Road Safety Corps, FRSC couldn’t get a towing van to lift the remain of the tanker off the victims.

A community source who spoke to our Correspondent on condition of anonymity said “the Officers of the FRSC really tried their best; they had to keep vigil at the accident spot in Odoba till on Monday morning when they were able to get a towing van from Enugu State to remove the tanker from the bodies of the victims which were crushed beyond recognition. Can you imagine the FRSC don’t have such equipment in Benue State”.

Our Correspondent was unable to speak with the Unit Commander of the FRSC in Ogbadibo to ascertain the official figure of the casualties. Similarly, all efforts made by our Correspondent to get the Public Relations Officer of Benue State Polytechnic, Ugbokolo on the casualties on the part of the school proved abortive as he was not on seat on Monday as at time of visitation and he didn’t return his missed calls.

Meanwhile, another community source has revealed that about 8 persons lost their lives in the unfortunate incidence, though he claimed he could only identify the driver of the car, (an indigene of Adum Otukpa), a student of Benue Polytechnic (from Orido Otukpa) and a nursing mother with her baby. 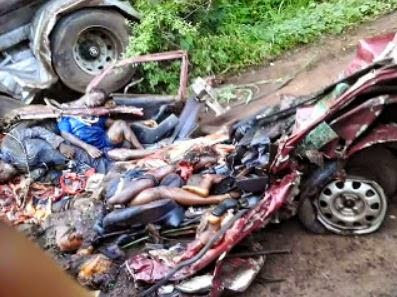