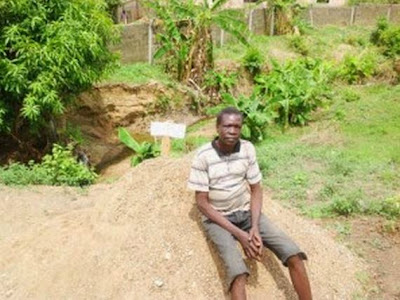 A Boko Haram survivor currently residing at Mararaba Gurku near Abuja, James Yaduma, tells Leadership how he lost almost all his family members in one fell swoop to the rampaging Boko Haram insurgents who struck his Zha community of Hong Local Government in Adamawa State about 7 months ago.

Yaduma, who was a farmer before he was sent packing from his village, has since started a new vocation in his new found abode to keep body and soul together by scooping sand in a nearby stream and disposing it to builders of houses as the place is a beehive of construction.

In his narration of what he suffered, Yaduma said life for him will never be the same since the gory and unfortunate incidence occurred, having witnessed how his aged father, mother and other relatives were burnt alive by Boko Haram insurgents.

“They struck our village in the wee hours of that fateful Friday and started shooting indiscriminately leading to the death of many residents.

“My aged parents, who could not run for dear lives, were trapped in our family house where the insurgents met them, set a bonfire and threw them inside alive,” he narrated.

Yaduma noted that among his family members who were at home when the insurgents struck, only he was lucky to escape by a hair’s breadth, having tucked himself in an obscure part of the house.

“When I started hearing gun shots, I instantly knew that Boko Haram had struck our village having taken over Mubi and other parts of the state. Since they took over Mubi, we could not sleep anymore as we knew very soon our village will come under attack,” he said.

He added that since he managed to escape the onslaught, he trekked for three weeks inside the surrounding bushes without knowing his bearing until he met some cattle rearers who accommodated him for few a days before showing him the way.

“After I escaped, I set out to Abuja since I know I have relatives here. I trekked most of the distance from Hong to Abuja but at intervals some spirited motorists do offer some help after hearing my ordeal,” he said.

He noted that the sand he sells fetches him between N5,000 – N7,000 weekly, just as he appealed to the President-elect General Muhammadu Buhari to do his best to secure Nigeria without prejudices as he said there is nothing like peace, noting that he is in his present state due to absence of peace.

“I am appealing to President- elect, whom I believe is an upright man to do all within his power to restore peace in Nigeria as many people have been made to suffer unnecessarily, having lost their lives and properties to the insurgency.

“Some of us want to return back to our villages but we cannot do so; all our houses, businesses and farms have been destroyed,” he said.