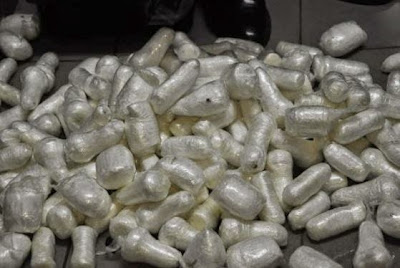 A 39-year-old suspected drug trafficker, Celestine Ikechukwu Okonkwo has excreted 70 wraps of cocaine weighing 1.326kg shortly on arrival from Brazil.He was arrested at the international wing of the Nnamdi Azikiwe Airport (NAA),Abuja.

Narrating his ordeal in the hands of drug barons, who sponsored his trip to Brazil under the guise of white collar job, the suspect who sells used clothes at Idumota market, said that he was promised mouth-watering job opportunities here in Nigeria.

“I was in my shop at Idumota market where I sell used clothes. I will never forget the day a young man came to my shop to buy shirt. He told me he is from Anambra and that he lives in Brazil. He also promised to help me with a good job opportunity over there. Honestly, I was excited and felt it was answer to my age long prayer. He collected my phone number and left. This was how it all started.”

He prepared my international passport and also secured a visa for me. Then he told me to get set to travel anytime. Few weeks later, he brought my ticket and I travelled to Brazil in January 2015. He gave me the name of the hotel where I will stay pending when he will get me a job. I was eventually abandoned to suffer. When I exhausted my money, I began to sleep in a church. I also began to work for a Nigerian woman who owns a restaurant in order not to starve to death”.

Nobody discussed drug trafficking with me while in Nigeria. It was after I had lived in the church for some months that my sponsor located me in Sau Paulo. I was told that there is no free lunch in Brazil and that I have suffered and experienced difficult life in Brazil. This was the point they introduced drug trafficking as the only way out. They said that was what people do to make money. It took me about seven hours to swallow 70 wraps of cocaine. I was inexperienced because it was my first time. They promised to pay me N400,000 when I get to Nigeria.”